What better way to end off the squash season than with the National Squash Championships held in beautiful BC from June 1-5? What if we made it even better with a glass court overlooking the Vancouver harbour? What a crazy idea you might think… Well, we did it! With the 2022 Oxford Properties Canadian Squash Championships coming to an end this past Sunday, we can now reflect on the exhilarating five days we spent watching lots and lots of exciting squash. 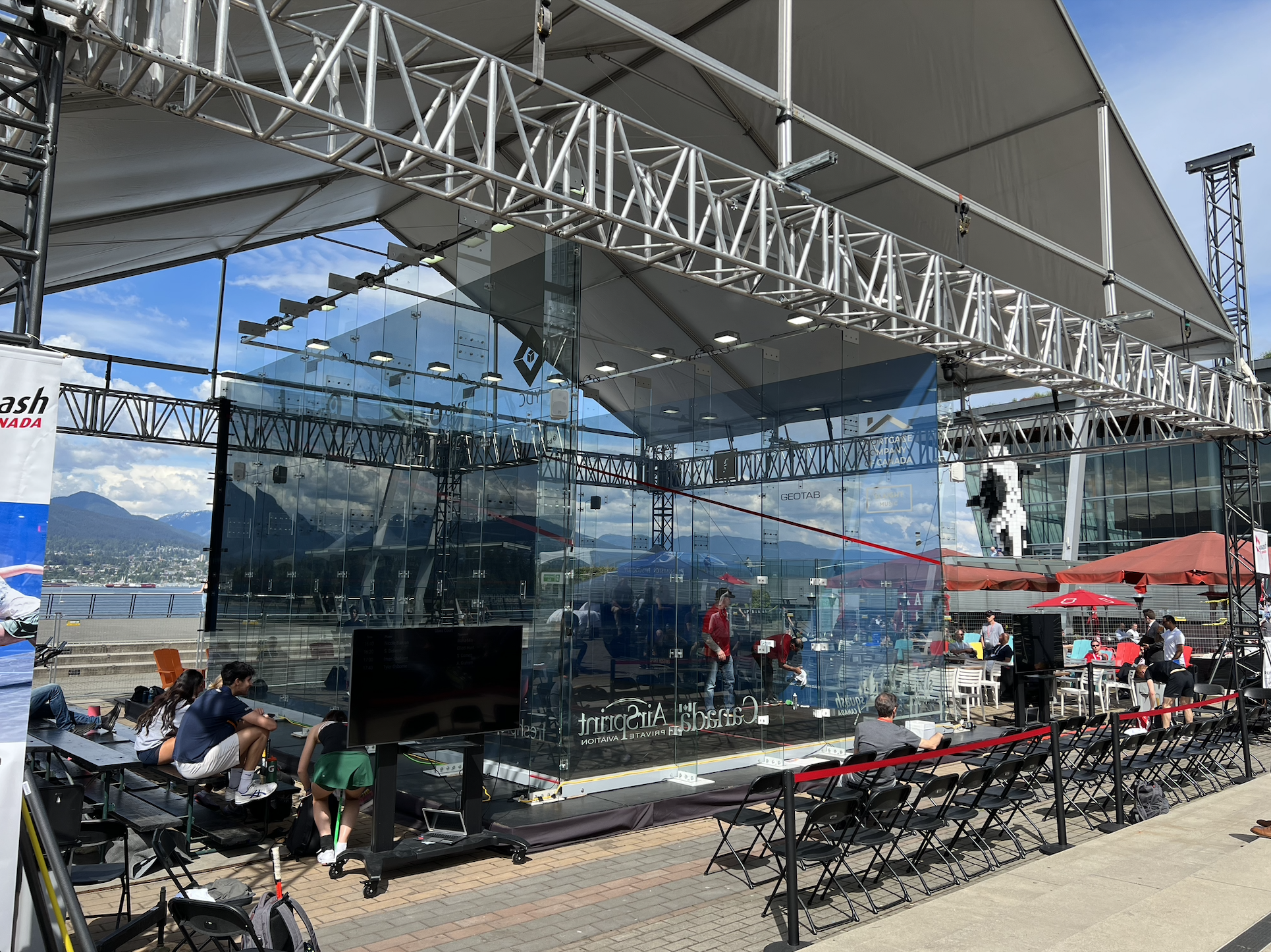 On the final leg of its trip around the country, having just passed through Victoria for the Canadian Junior Squash Championships, the all-glass ‘Power Court’ made a historic stop at Jack Poole Plaza in downtown Vancouver. It played the role of “show court” for a tournament with nearly 400 eager competitors — one of the biggest turnouts the event has ever seen! With June usually being a sunny month for the beautiful city of Vancouver, there was plenty of rain planned for the weekend, marking the first time squash players were genuinely concerned about the weather hindering their play. Despite a few spurts of rain and some delays, players and supporters toughed it out, the exciting squash lived on, and the entire event was a resounding success.

While we all soaked in the beautiful setting at the glass ‘Power Court’, there was lots of work done behind the scenes to ensure the tournament flowed smoothly. The event was an enormous feat to pull off and a tonne of credit goes to all of our amazing volunteers, sponsors, officials, fans and partner venues: Vancouver Lawn Tennis and Badminton Club, Evergreen Squash Club, Jericho Tennis Club, Vancouver Racquets Club, and YWCA Fitness and Racquet Club. Furthermore, the brains behind the entire operation (also known as the tournament committee) put all their hard work and dedication into this event over the last few months to ensure it became a reality. Squash BC would like to offer an enormous thank you to tournament chair Viktor Berg and the entire committee: Richard Yendell, Bruce Matthews, Andrew Lynn, Thomas Brinkman, Josh Struthers, Richard Freeman, Carl McCreath, Colin Latchford, and Jamie Nichols and Sam Cornett from Squash Canada. 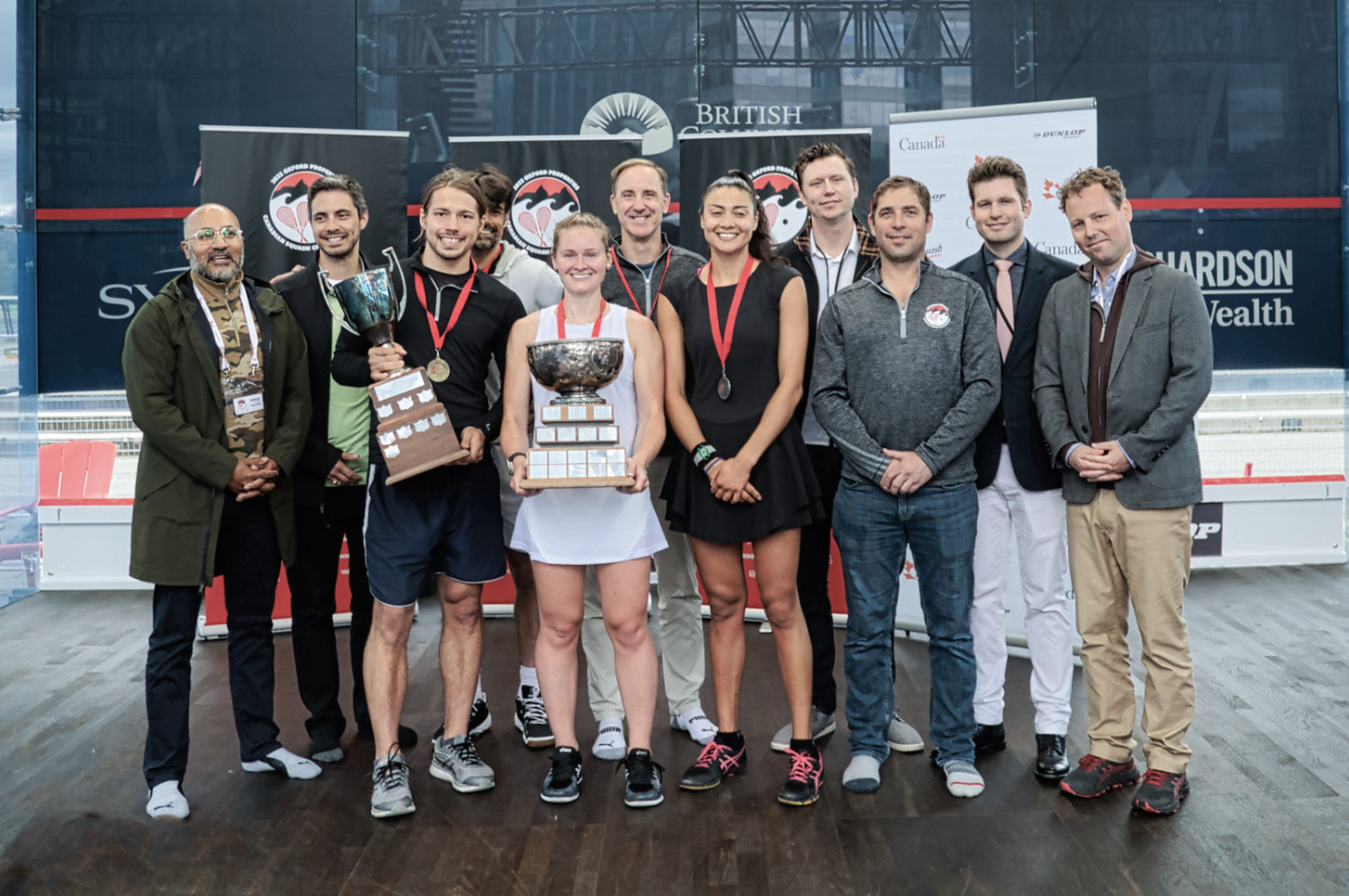 With plenty of draws to play in, there was a chance for all squash players to participate, and BC made sure to make its mark on the tournament. Victoria’s very own, Nicole Bunyan, #45 in the world, finished in 2nd place in the Women’s Open Draw, falling in three to Ontario’s Hollie Naughton in the final. 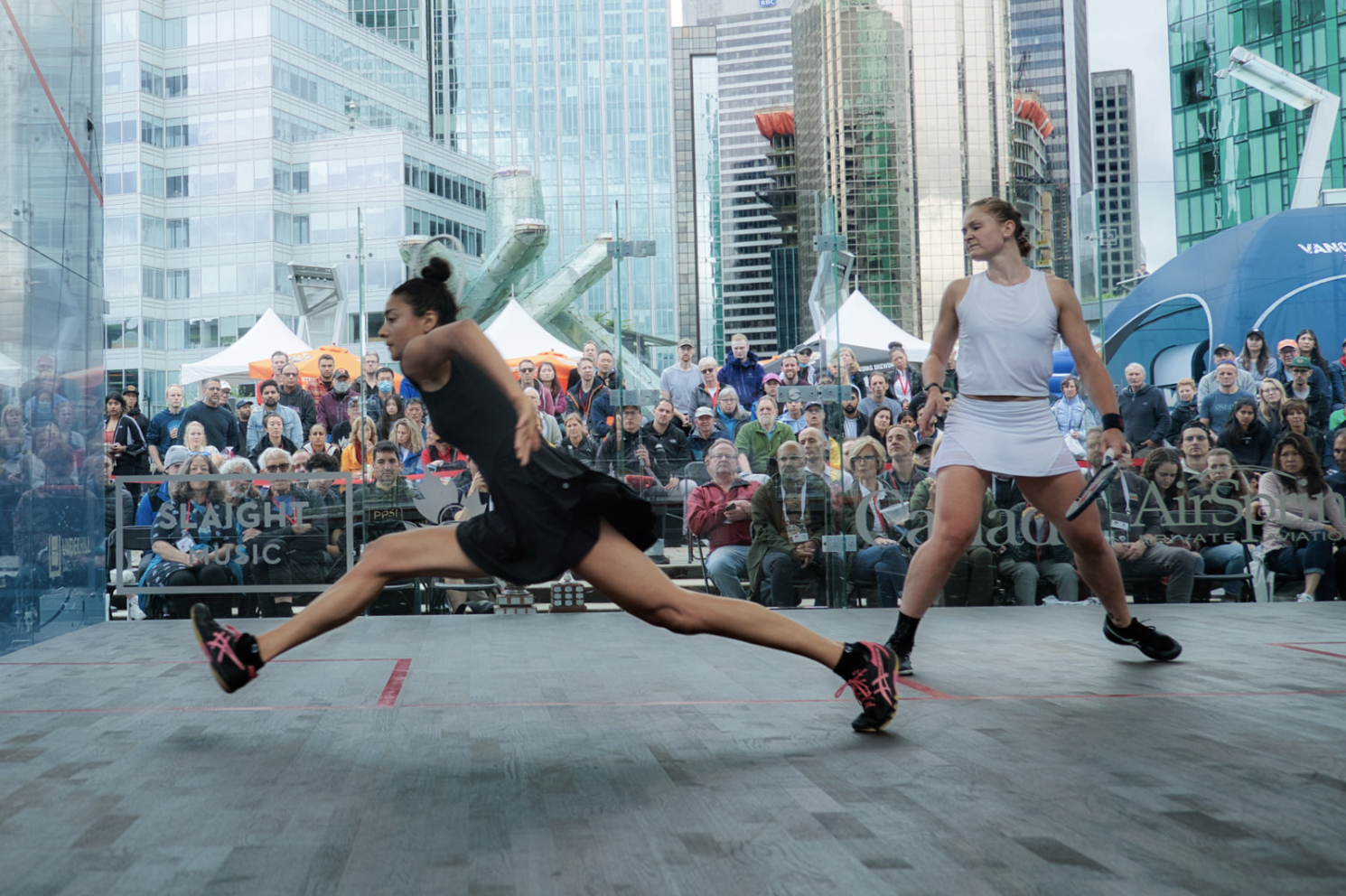 In the Men’s Open Draw, after a four-set battle, David Baillargeon was victorious over Shawn Delierre to repeat as the national champion for the second year in a row.

Sarah Aki, one of Squash BC’s bright juniors, competed in the Women’s U23 Draw and also came in 2nd place, after a tough final against Nicole Temple. 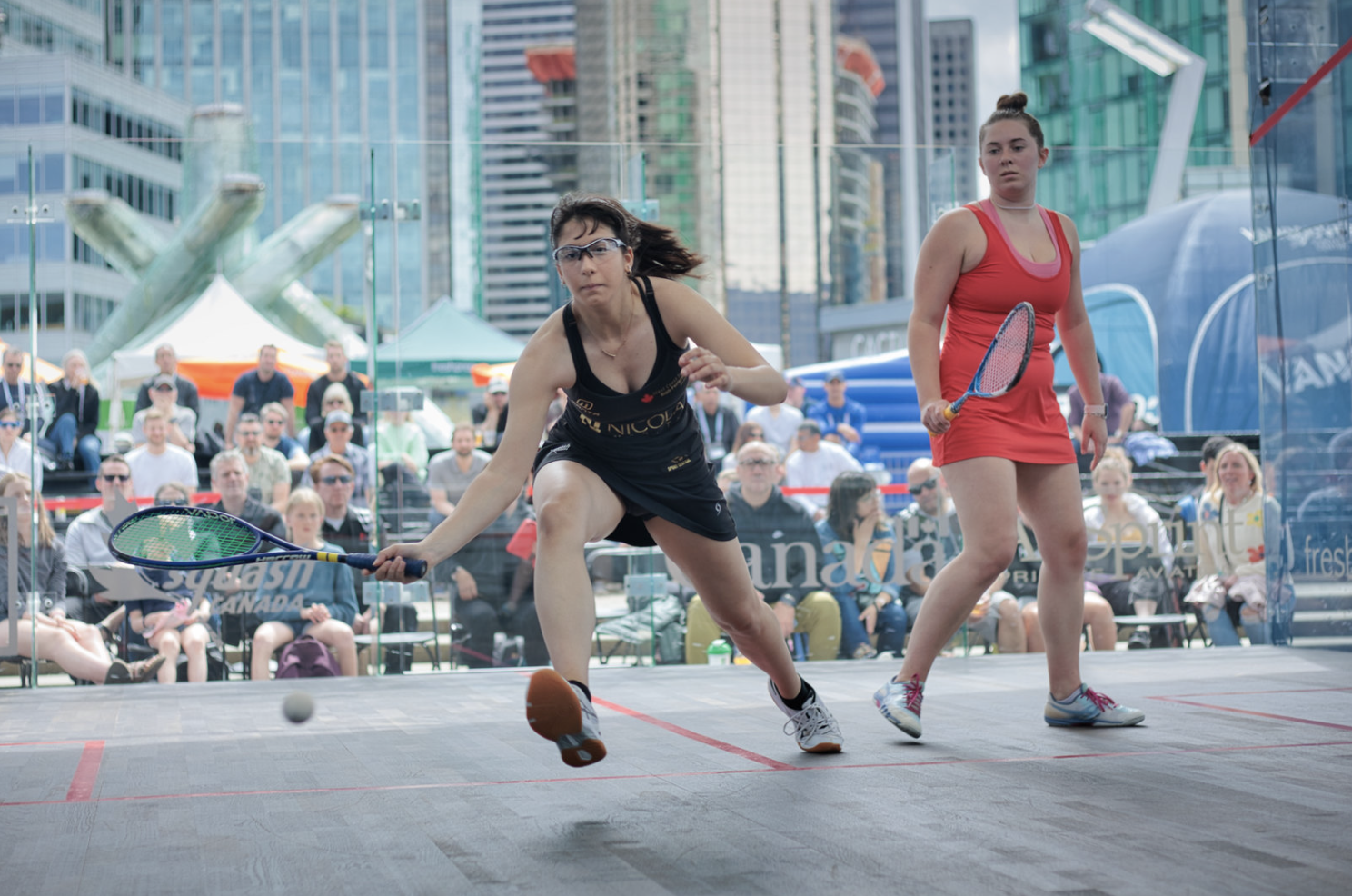 In the Men’s A Draw, it was “The Battle of Surrey”, with Navin Samarasinghe coming out victorious over Alex Garceau in four games. In the Women’s B Draw, BC occupied the entire podium, as North Vancouver’s Christine Yablonka took home the title, Vancouver’s Angela Hong took second place and Vancouver’s Jamie Sonego sealed her spot in third place. 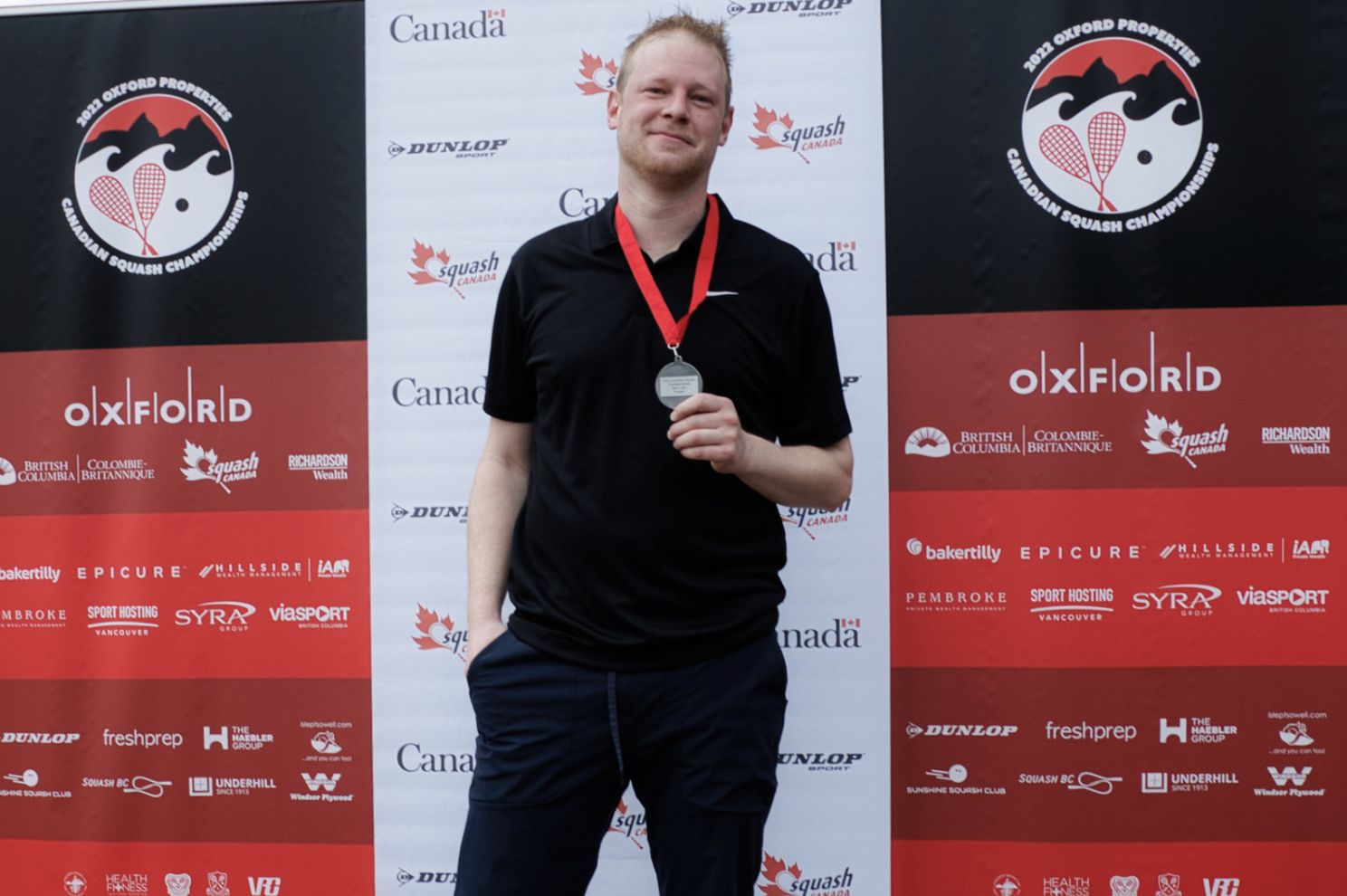 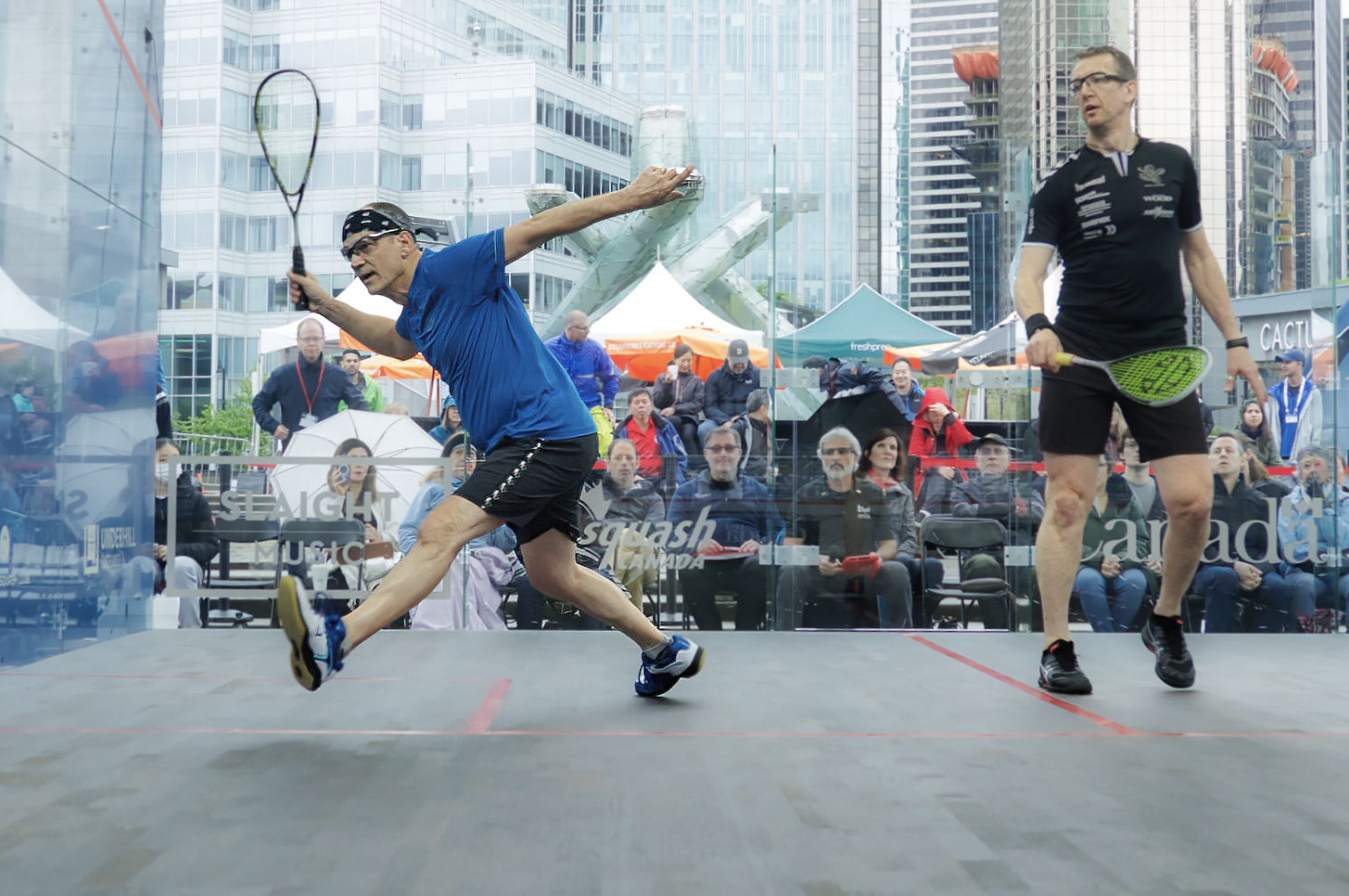 Lauren Wagner swiftly secured the Women’s 50+ draw and Vancouver’s Cathy Brown along with Richmond’s Barry Gifford both captured the 60+ titles in their respective draws. 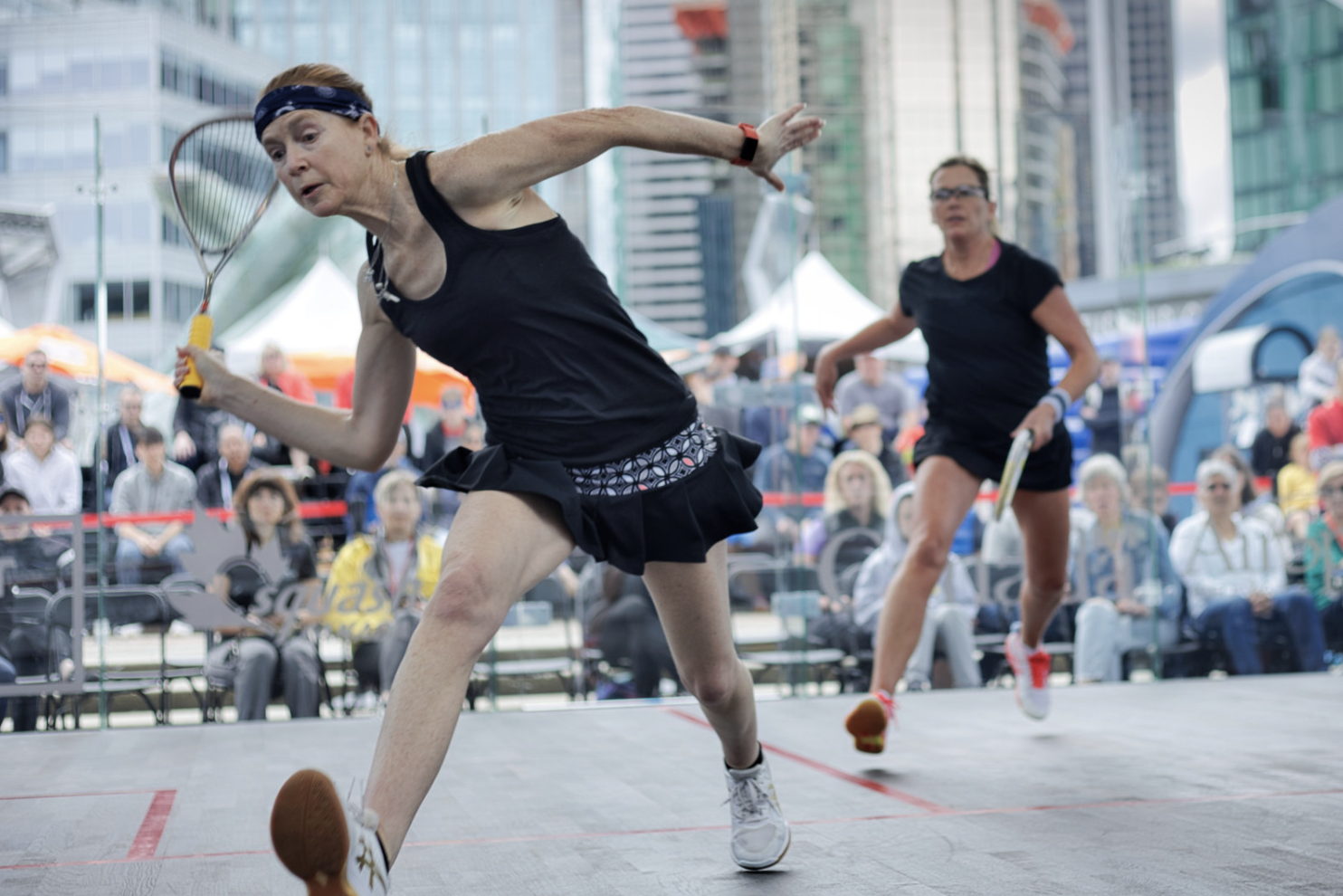 And finally, Burnaby’s Rick Ng won the 65+ while West Vancouver’s Doug McDougall won the 70+, showing us all that age really is just a number!

Below are some of the Glass Court match recordings from the week:

Here is the full list of some of BC’s most notable results:

For a complete list of draws and match results, please make sure to visit the tournament’s Club Locker Page.

Photos from this article were taken by Corina Lynn on behalf of Squash Canada.