BC Junior athletes continued their dominance at the national stage this past week by winning three National Championships Titles and eight medals total in gold divisions. Additionally, BC athletes continued their success in the silver and companion events with five championships and a total of 14 medals. The 2022 Canadian Junior Closed Championships was hosted by the Cedar Hill Squash Club in Victoria and attracted 205 of the top junior athletes from across the country. The event provided the juniors to experience playing on the Squash Canada All-Glass Power Court!

This year’s event featured Gold draws that were limited to the top 16 athletes in the country in boys and girls U13, U15, U17, and U19 divisions. All athletes that did not meet the top 16 requirements had the opportunity to compete in Silver draws, which were hosted at St. Michael’s University School. The Silver and Companion divisions allowed an opportunity for many of BC’s top athletes to experience their first National Championships on home soil. 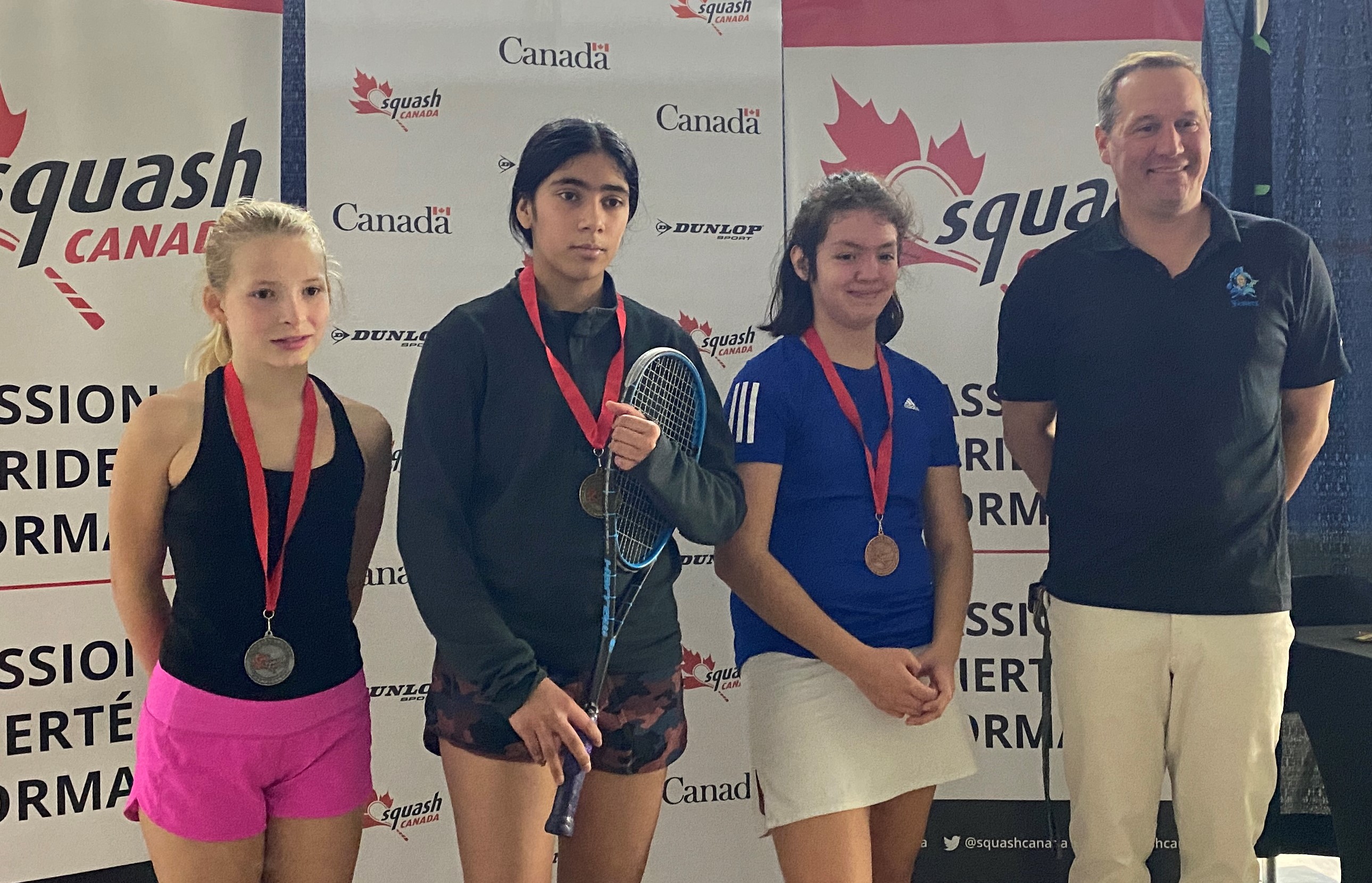 Richmond’s Veera Dhaliwal dominated the Girls U13 Gold division winning all three of her matches in 3 games and only dropping only 40 points across those 3 matches. Veera was crowned the Girls U13 National Champion after defeating Ontario’s Olivia Bolger 11-4, 11-3, 11-8 in the final. North Vancouver’s Jayme Bracewell secured 6th overall and Vancouver’s Clara Min took home 7th. Burnaby’s Malika Markman also competed and reached the plate 1b final. 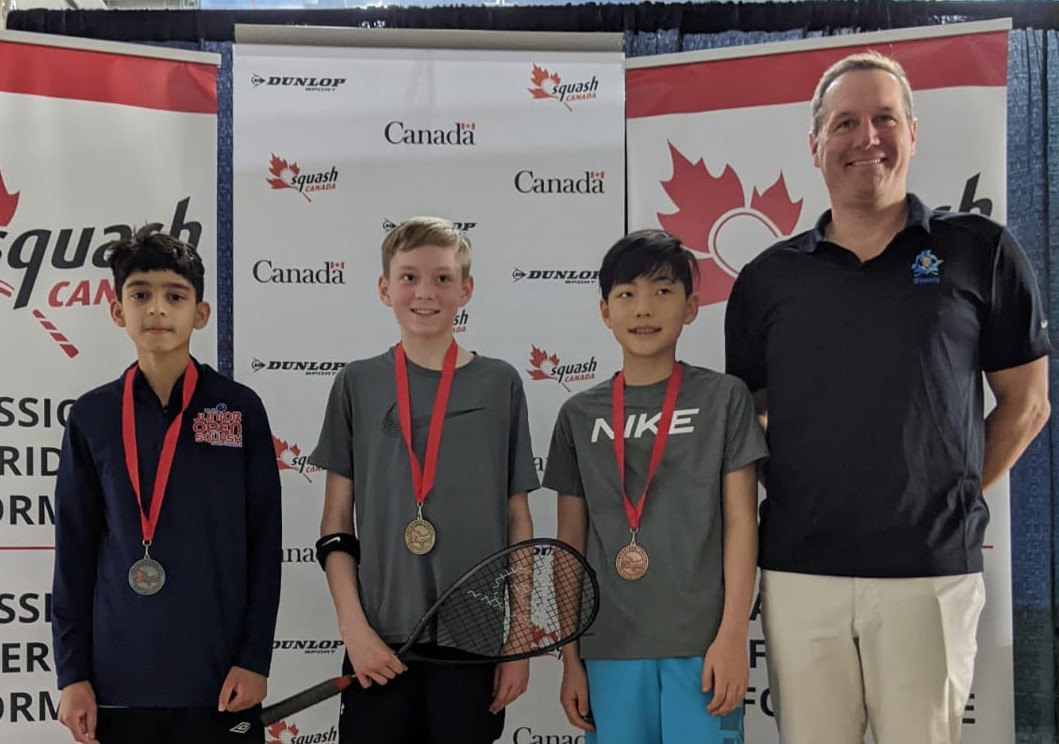 The Boys U13 Gold draw had a nail-biting final where Vancouver’s Daniel Tiwana came up just short in the final, losing the five-game marathon 7-11, 12-10, 7-11, 11-4, 11-5 to Kent Rawlins of Ontario. Joseph Suh secured the bronze medal, after defeating Ontario’s Shaan Jolly. Also featuring in the division were Vancouver’s Daniel Wang, who placed 6th and Theo Song. 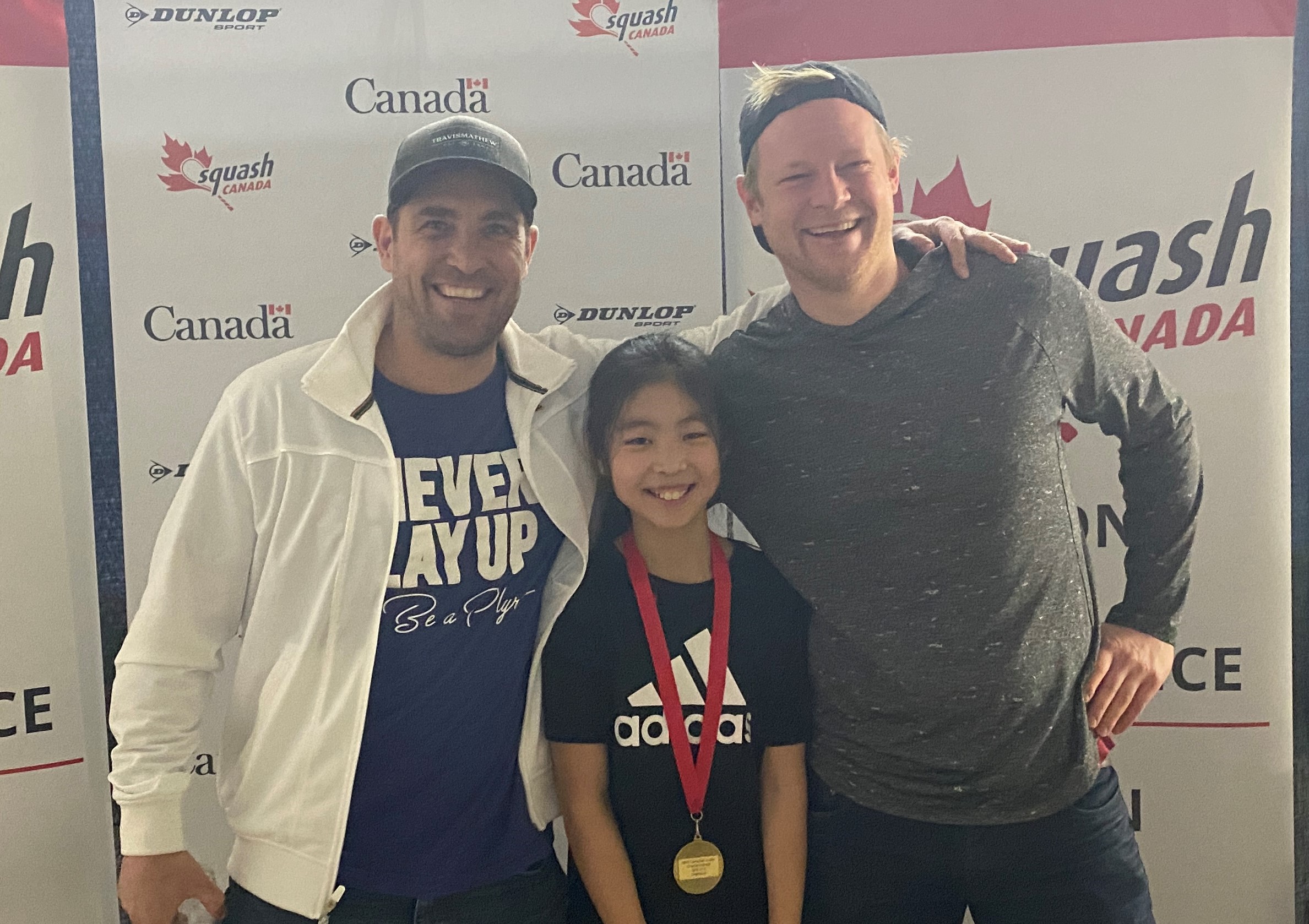 Richmond’s Joelle Kim decided to play up an age category in the Girls U15 draw, but that did not slow her down. Joelle cruised through the competition winning every match in 3 games. In the final, Joelle faced Ontario’s Aneesa Tejani winning 14-12, 11-6, 11-6 to be crowned Girls U15 National Champion. Richmond’s Yu Ying Ng was able to secure 5th overall, winning the consolation final against Ontario’s Zoe Chong. Heyang Angela Hong and Ella Cao also competed and faced off in the plate 1b final where Heyang Angela won 11-7, 11-5, 8-11, 12-10.

The Boys U15 Gold division saw Richmond’s Yusuf Matti-Alvarez lead the charge for the BC athletes, but unfortunately he had to withdraw from the tournament before his bronze medal match. Victoria’s Anderson Brown was able to rebound after losing to Yusuf in the quarterfinals to win the consolation final and place 5th overall. Kamran Gwadry also had a strong showing, coming 8th overall after losing to a tight 5-game consolation playoff. Three other BC athletes: Orin Song, Norman Yue and Nathan Ko also competed, with Nathan winning the plate 1B Final. 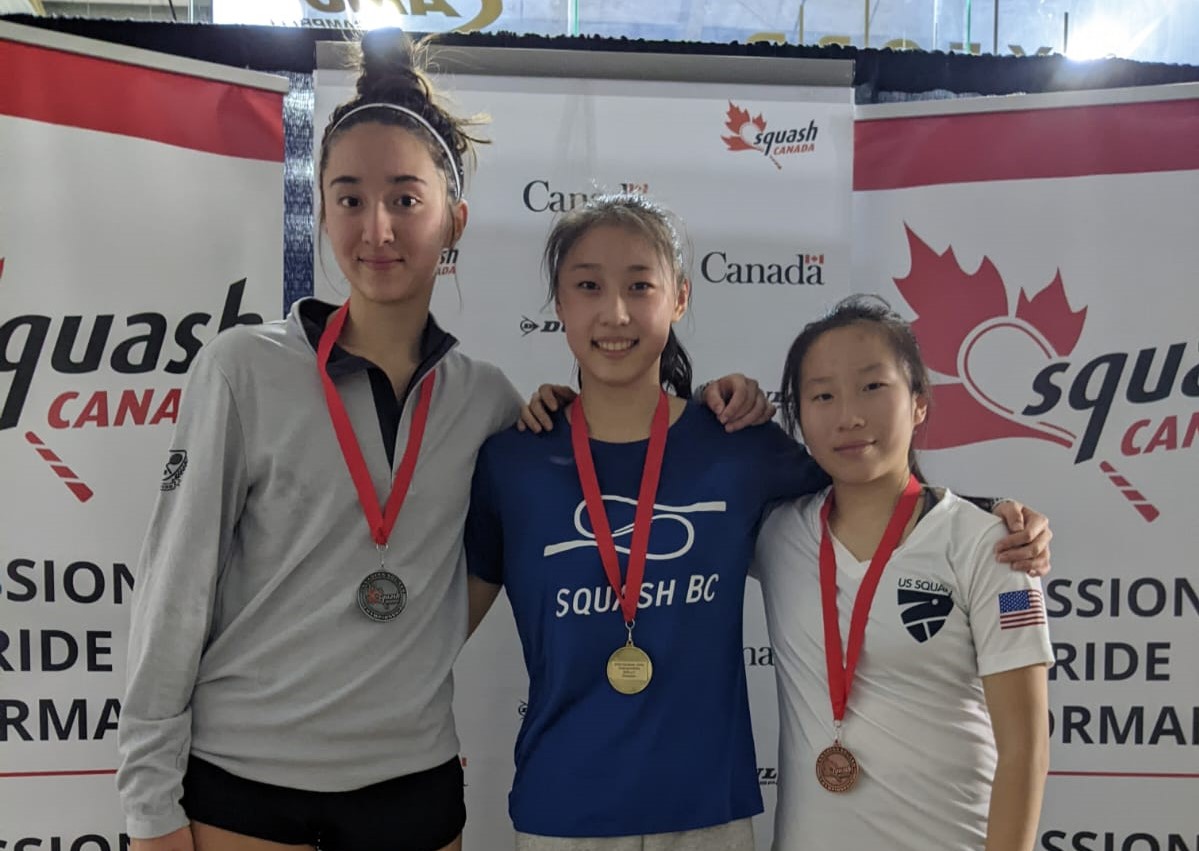 The Girls U17 Gold division was dominated by BC athletes, who made up the entirety of the division’s top four! The final saw an intense and highly anticipated matchup between Richmond’s Ocean Ma and Vancouver’s Maria Min. The back-and-forth marathon became a 5-game thriller with Ocean earning the championship title. Both girls held multiple championship points before Ocean closed it out 11-6, 11- 5, 11-13, 4-11, 13-11. In the bronze medal match, Vancouver’s Hermione Cao and Richmond’s Spring Ma battled it out where Hermione was able to come out on top 9-11, 13-11, 11-3, 11-9. Victoria’s Kathryn Herring finished 8th overall, after losing to Spring Ma in the quarterfinals. Lialah Mavani, Kira Gwadry, and Sarah Aki also competed in the draw. 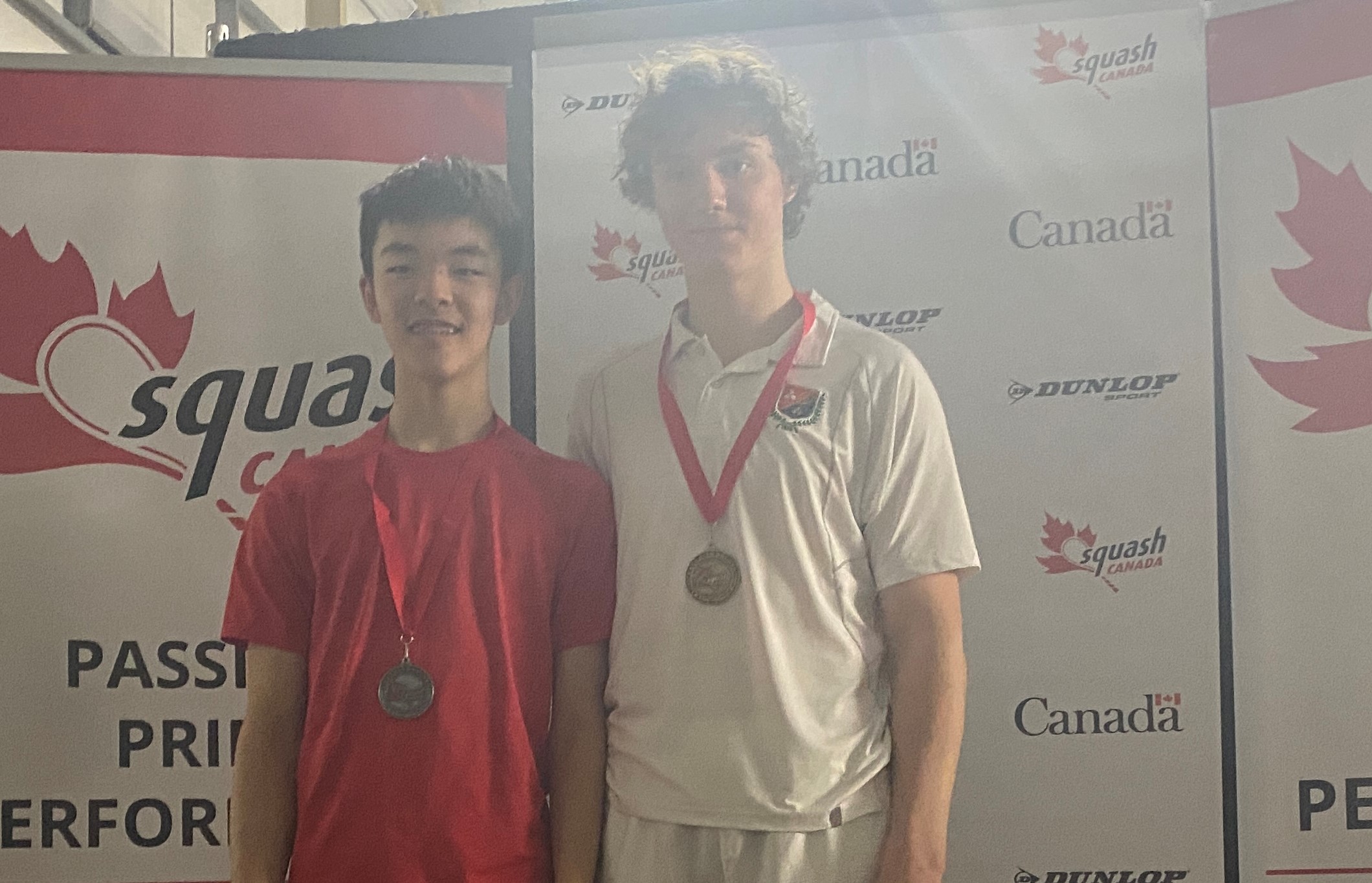 Vancouver’s WeiHan Wang added another silver medal to his resume by following up his 2021 Canadian Junior Open performance in December with another silver at this tournament in the Boys U17 Gold division! West Vancouver’s Roman Bicknell secured 6th overall, after losing a tough consolation final against Ontario’s Wasey Maqsood. Henry Jiang, Dylan Scott, Richard Wang, and Jens Bolder also competed with Jens winning the plate B final against Dylan.

Victoria’s Alex Brown led the way for BC athletes in the Girls U19 Gold division placing 5th overall. Alex defeated Ontario’s Raya Singh in the consolation final 11-8, 12-10, 10-12, 11-7. Cynthia Yu, Sophie Dorrius, Sofia Quon, and Athena Yu also competed in the draw, where Cynthia went on to win the plate 1b final. 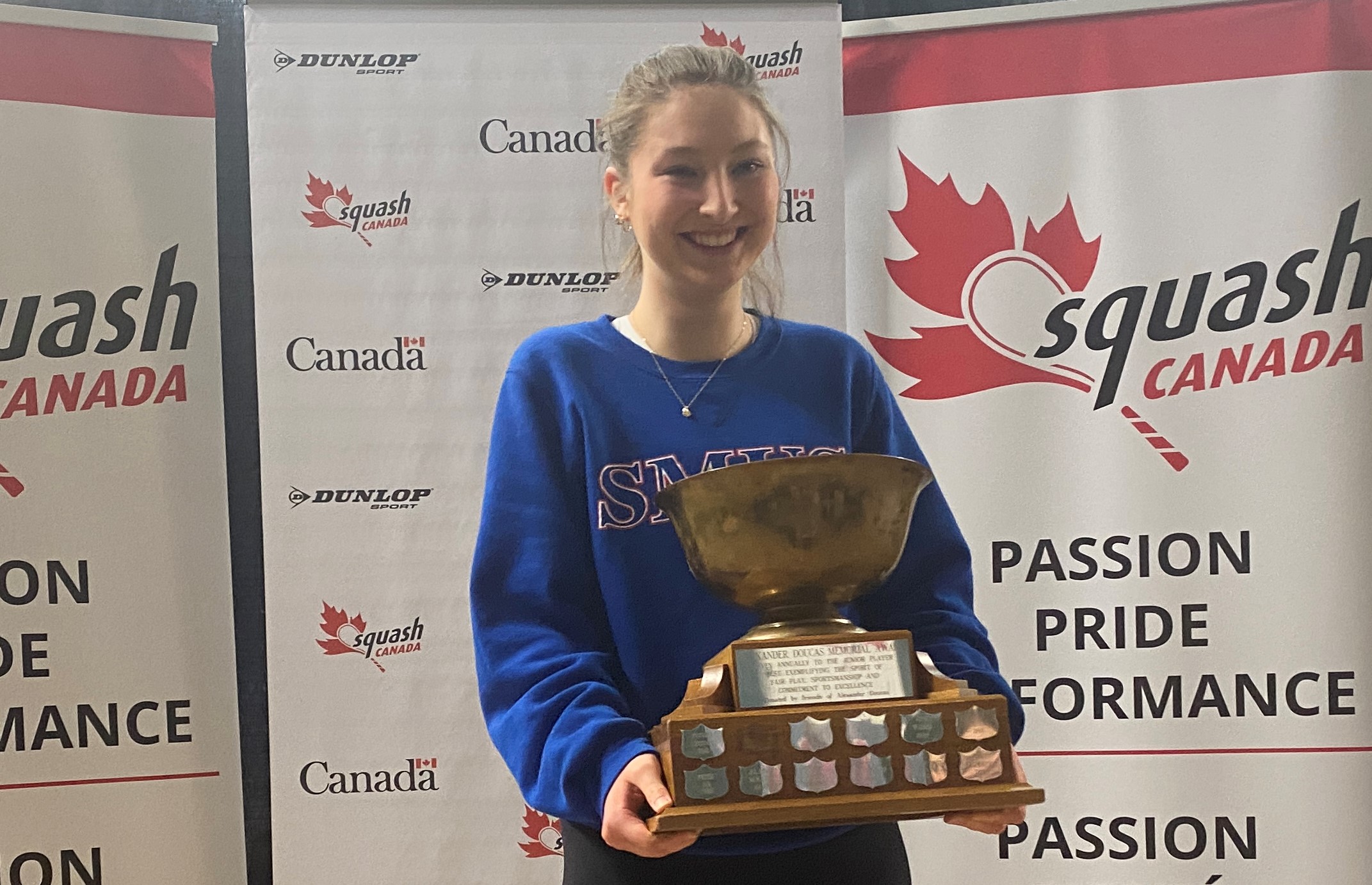 At the event’s close, Alex Brown was awarded the Alexander Doucas Memorial Award which is presented to the competitor in the Canadian Junior Squash Championships who best exemplifies the spirit of fair play, enjoyment of life and commitment to excellence, as exhibited by Alex Doucas during his lifetime. This award is voted on by event coaches and officials and is given to a player who best exemplifies the values Alexander Doucas showed on court during his life.

The Boys U19 Gold division saw Richmond’s Jacob Lin lead the way for BC athletes playing up an age category, but unfortunately just missed out on the podium, finishing 4th overall. Jacob lost a tight 5-game match on the glass court in the semi-finals against Quebec’s Abbas Nawaz 11-8, 11-7, 9-11, 6-11, 11-8. Richmond’s Joseph Toth finished 6th overall, after coming up just short in the consolation final. Christian Yuen also displayed a strong showing, finishing 7th overall. Morven Liu and Rio Schafer also competed in the Boys U19 Gold draw. 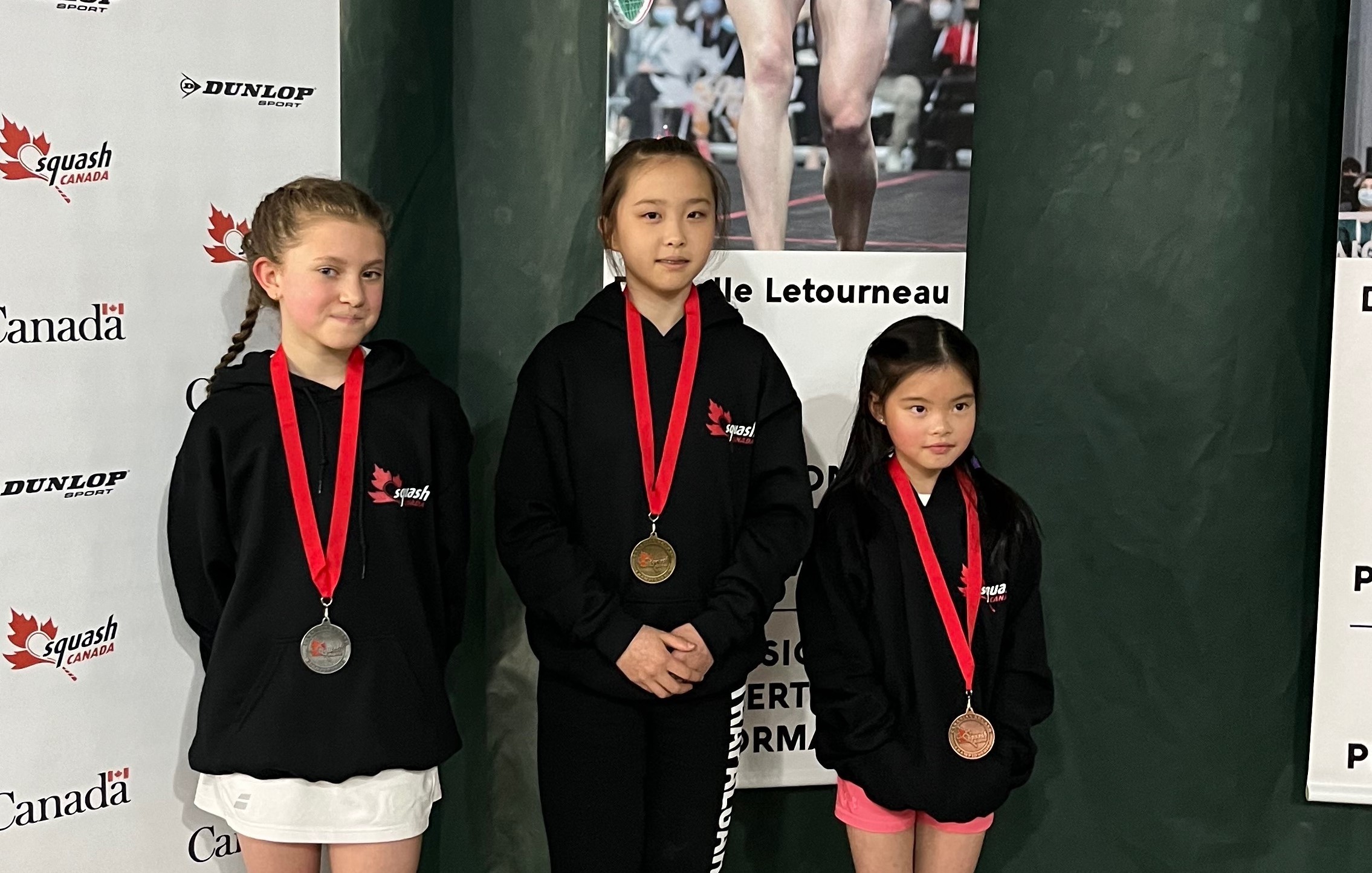 This year’s tournament saw a U11 Companion event hosted in conjunction with the tournament, which allowed many of our talented young talent to compete in a fantastic competition and experience a National Championships. In the Girls U11 draw, Lily Fan of Vancouver dominated the competition losing not a single game over five matches and only dropping 35 points. Richmond’s Mabelle Sy was able to secure bronze after going 3-2 in group play. Richmond’s Loretta Chung also competed in the Girls U11 Companion event. 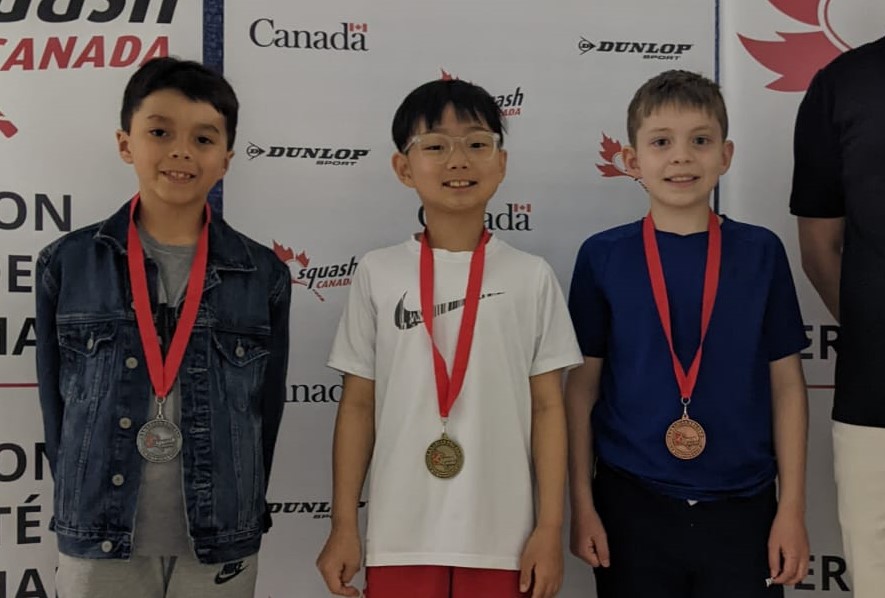 The Boys U11 Companion division saw a very tight championship group pool, where all three of the matches finished 3-2. BC’s Joshua Suh was crowned the U11 Champion even after losing his first match to Richmond’s Marcelo Toriz 11-9, 5-11, 14-16, 11-9, 11-7. In Joshua’s second match he beat Ontario’s Connor Rawlins 11-4, 11-5, 8-11, 6-11, 11-5 to secure the U11 championship. Marcelo took home silver after dropping his match to Connor 12-14, 5-11, 11-9, 11-8, 11-8. The event’s champion had to be determined by the third level of tie-breaking procedures, so all three boys were incredibly deserving! The companion event also allowed Dinno Cheng, Zaba Li, Kieran Boyd, Nolan Tupper, Kingsley Yuan and Nathan Lai to compete in their first national championship event.

This year’s event also provided silver draws for any players who did not meet the top 16 entry requirements of the gold draws. Congratulations to the following BC athletes for medaling in silver draws: 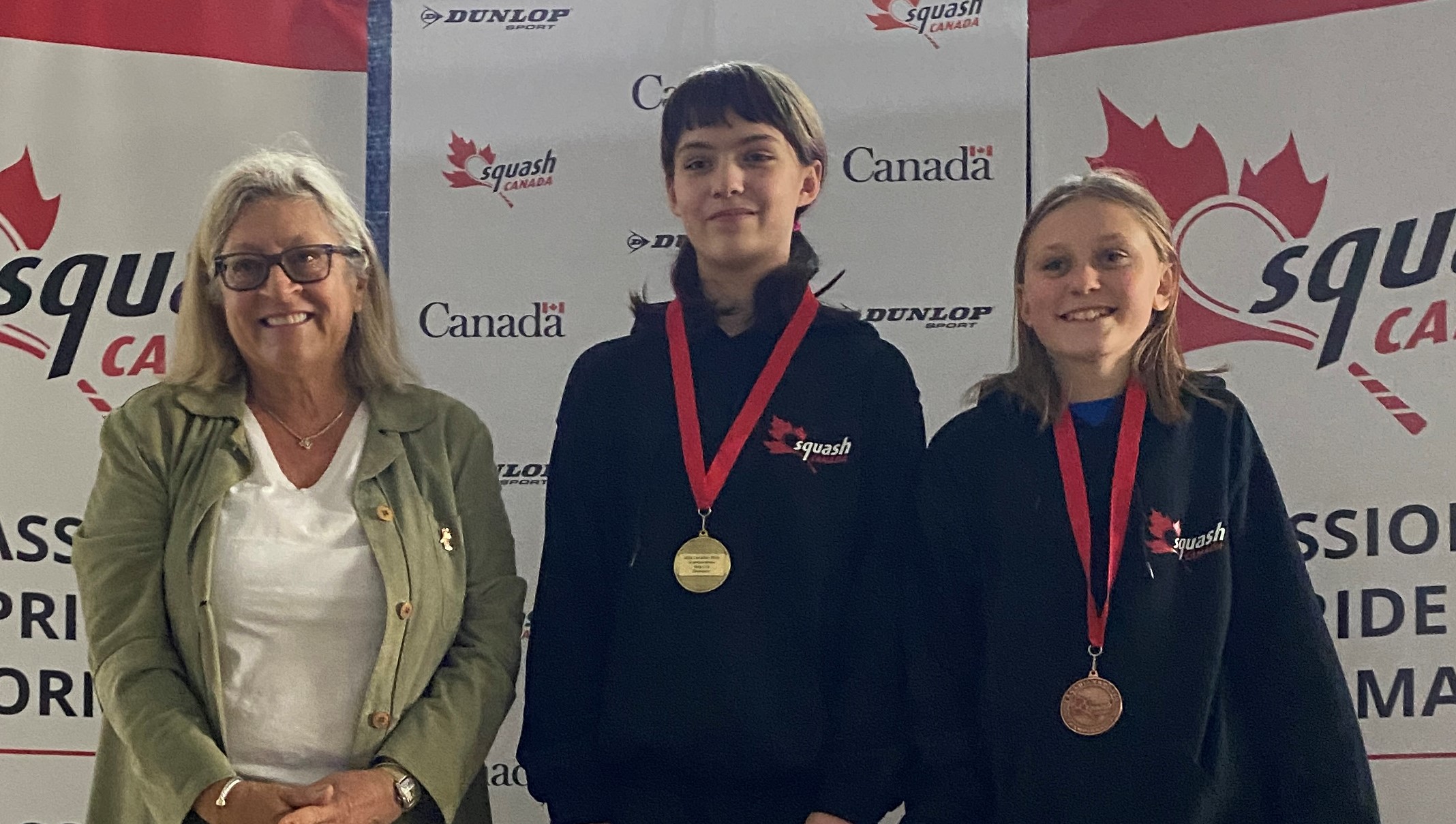 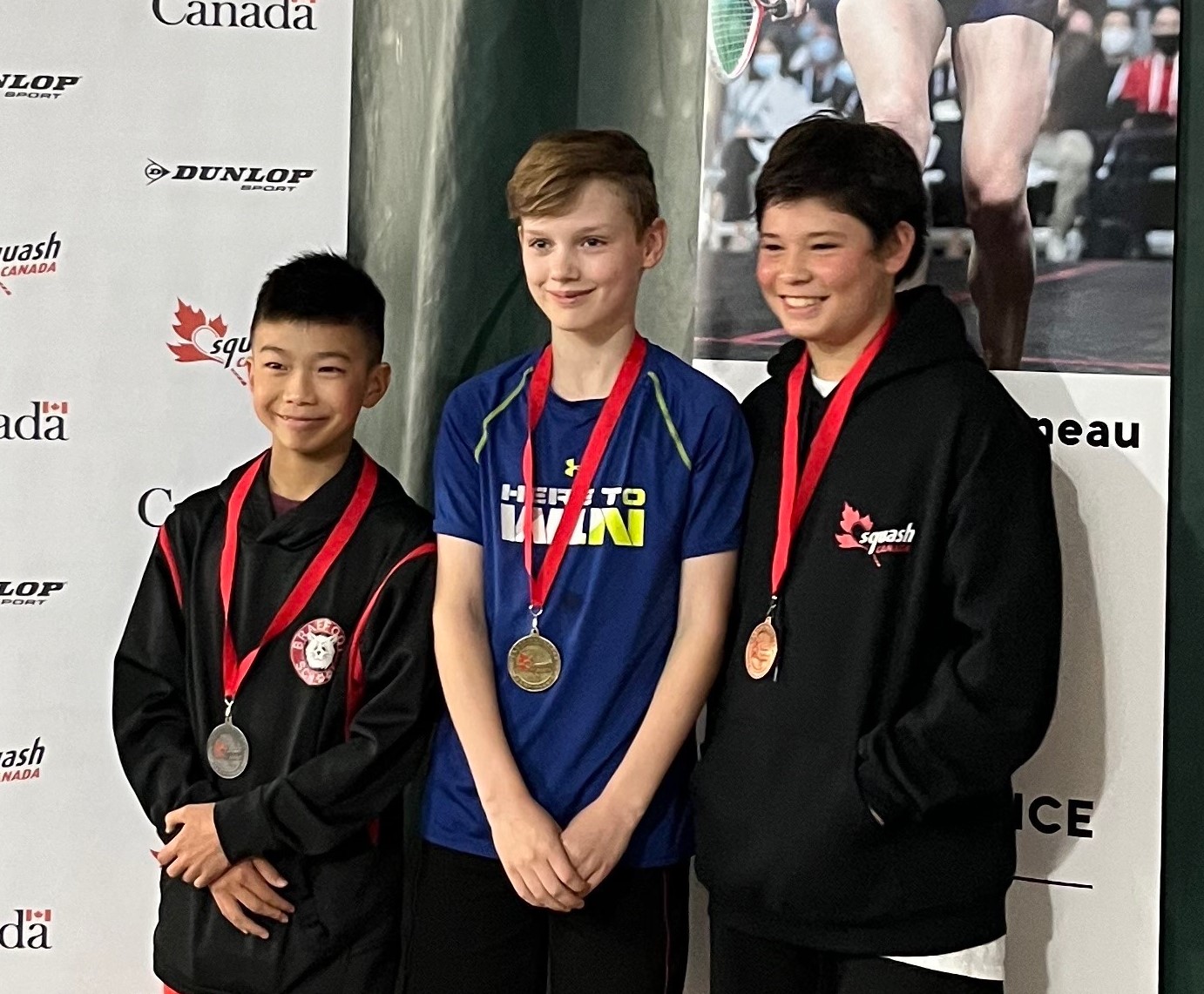 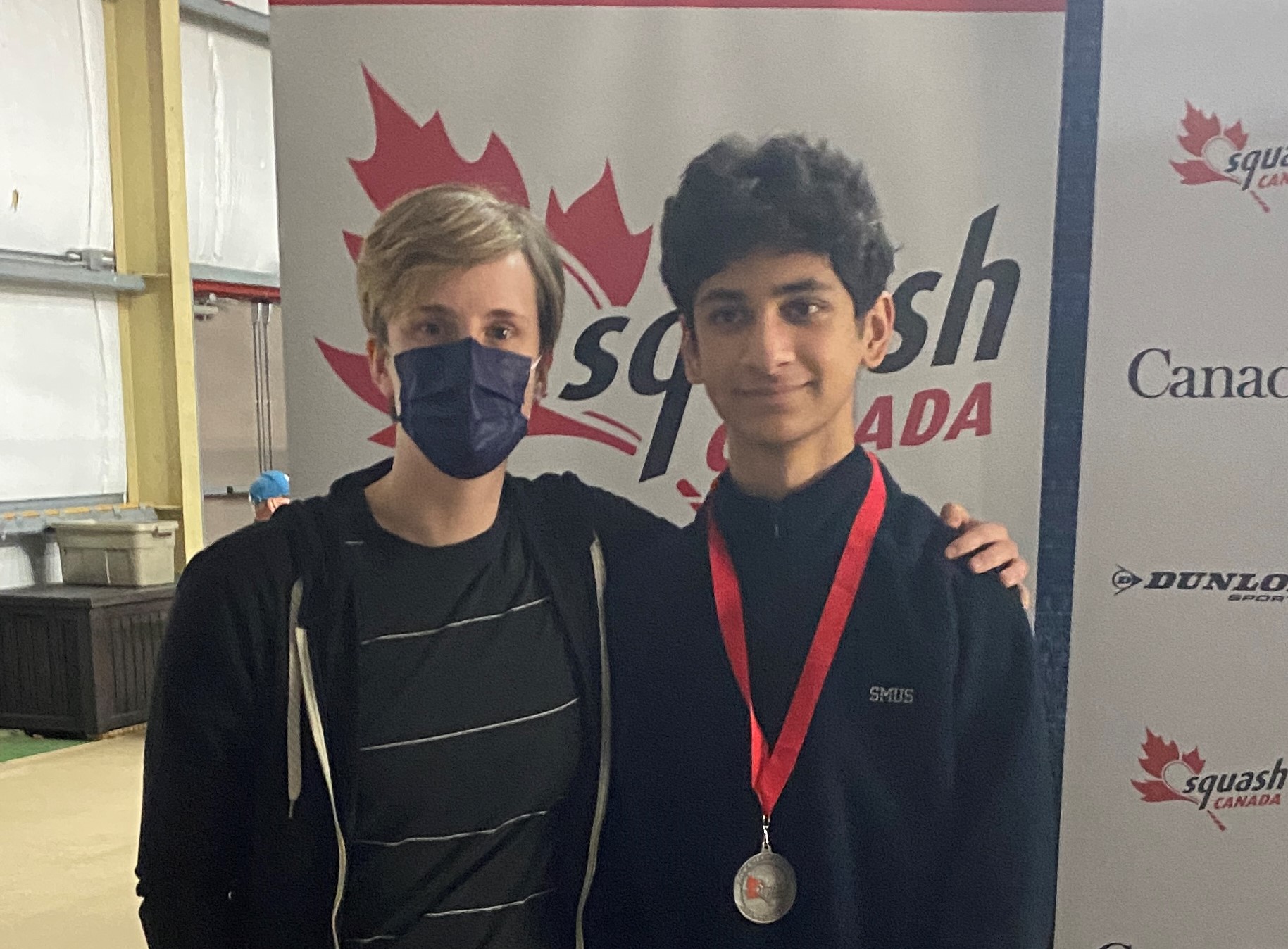 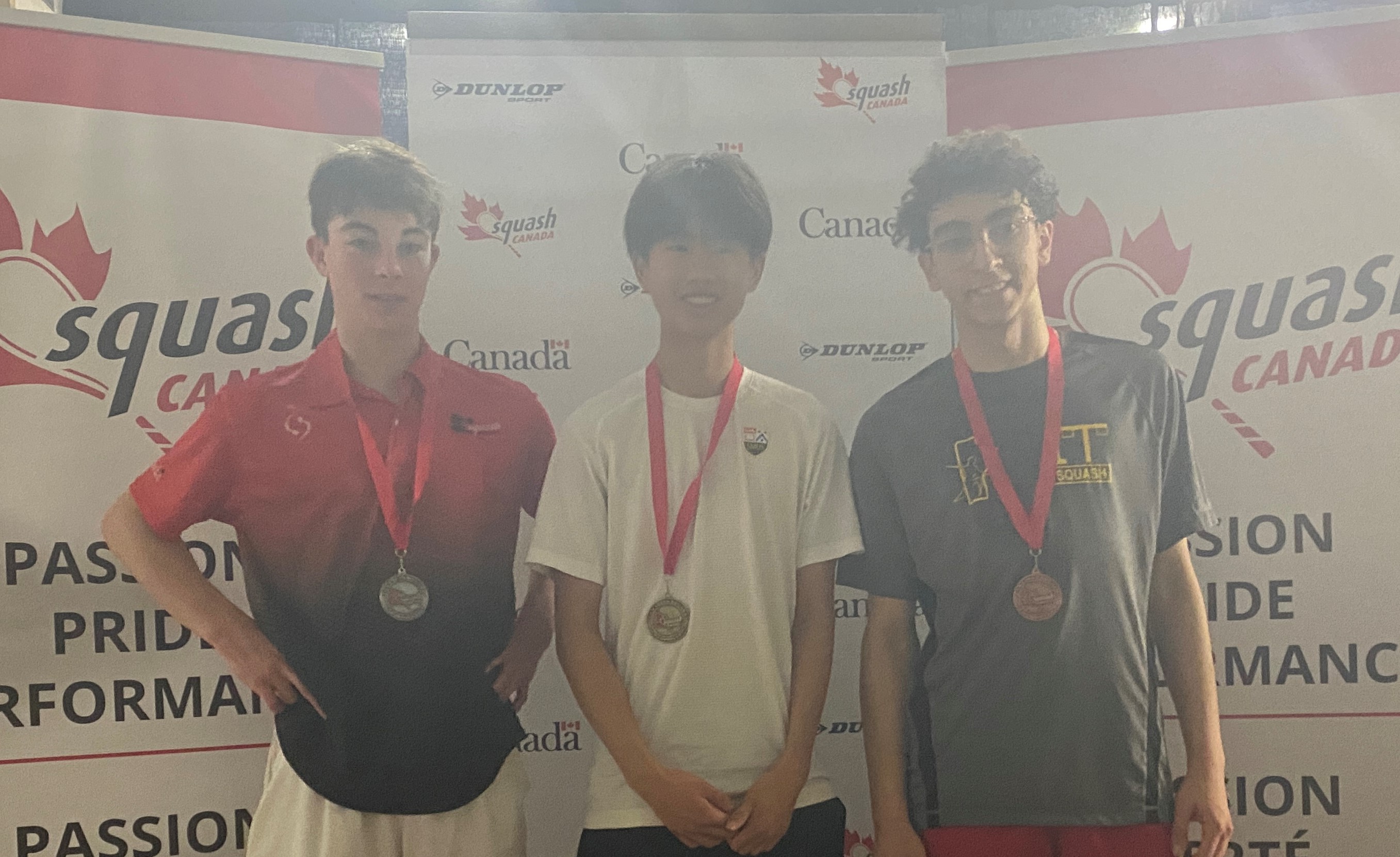 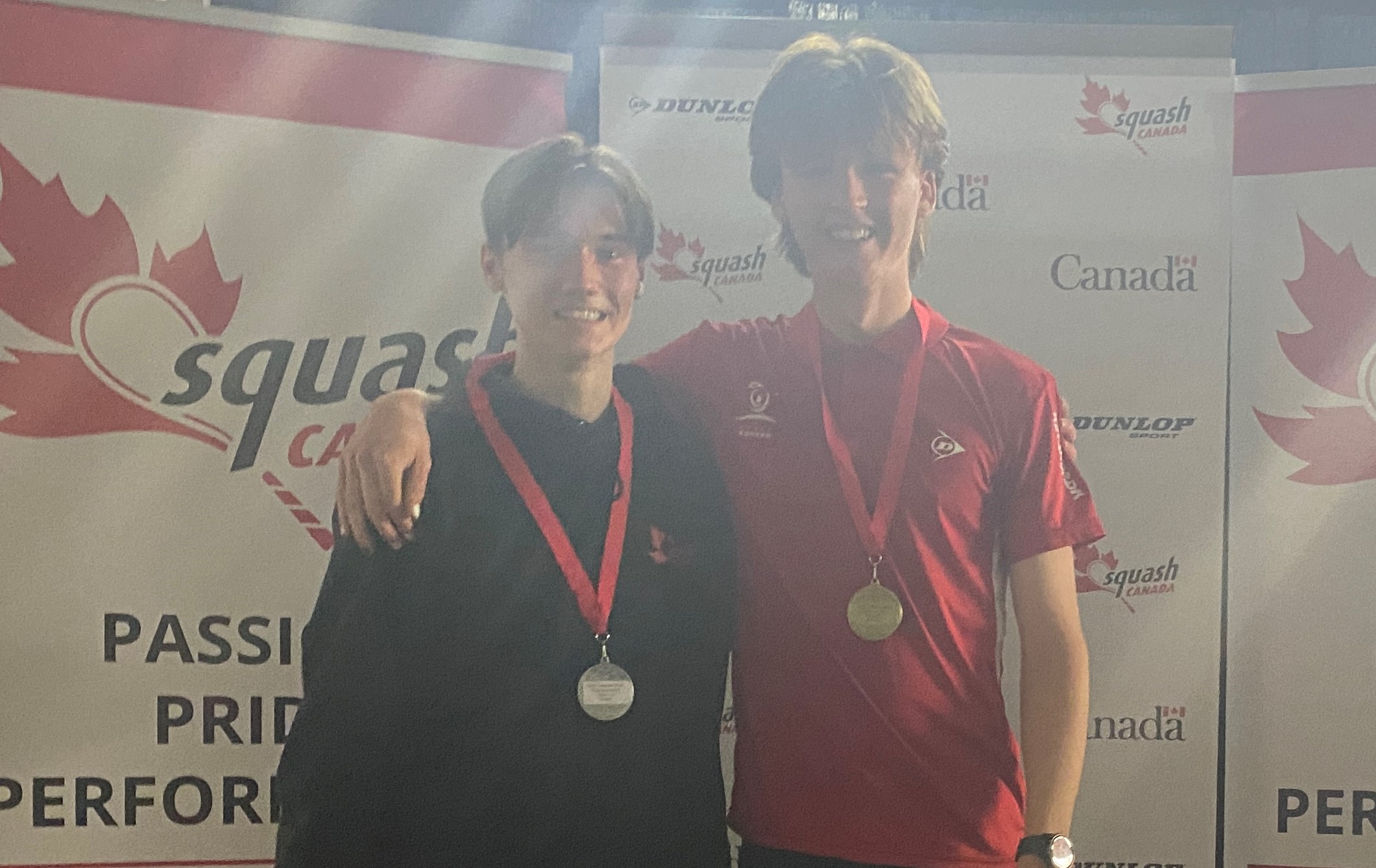 Squash BC gives a huge thank you to Tournament Chair Ben Uliana, Tournament Referee Christina Yap, Cedar Hill Squash Club, St. Michaels University School, and Squash Canada for putting for such an incredible event. We also thank all referees, event sponsors, players, coaches, parents, and especially volunteers for making the 2022 Championships a success! Events like this aren’t possible without the incredible support of the squash community!

For a full list of draws and match results, visit the event’s Club Locker page: https://clublocker.com/tournaments/13298/info

As well, Some of the matches during the weekend were recorded and can be watched here