Spring and Ocean Ma are only fifteen. Despite their youth, they are already highly accomplished athletes. Ocean placed 3rd in the Canadian Junior Open last December, and 4th at the US Junior Open one week later, while Spring placed 4th and 6th respectively. It was their first big tournament in the United States! Ocean and Spring are both on the Team BC High Performance Roster and Ocean is on the Junior National Squad. But their achievements don’t stop here: their passion ripples through the squash community in many ways.

Both girls started playing squash just over 4 years ago. They were introduced to the sport by a close family friend, Jacob Lin, who is a year older than them. Jacob’s mum encouraged the girls to pick up the sport. Jacob even mentored Spring by correcting her grip using a Sharpie. He has won the BC and Canadian Junior Championships. 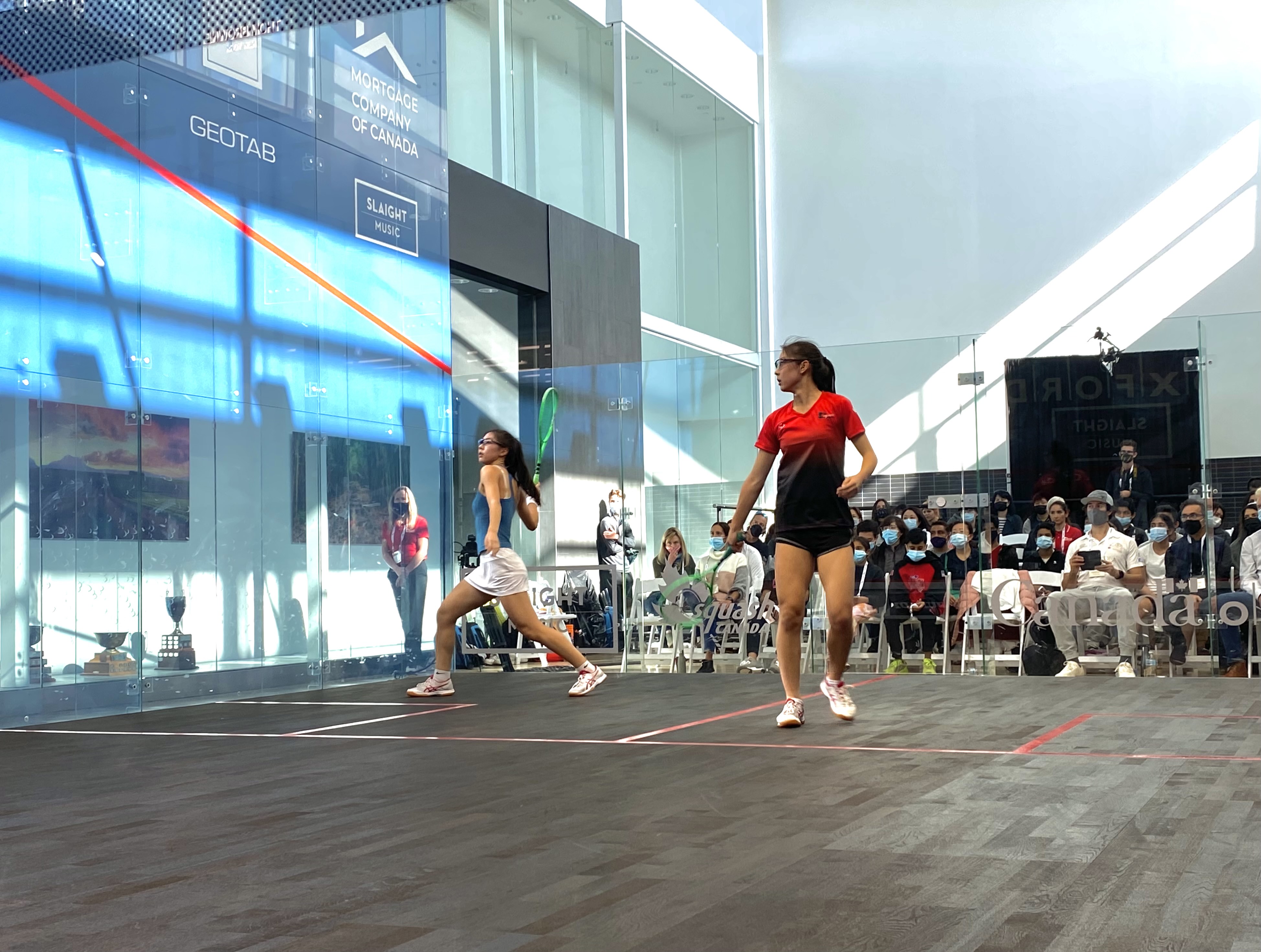 Even though they are identical twins, Ocean and Spring have had different squash journeys. For example, Spring never took more than a month off for injuries, while Ocean once had to step away for more than half a year to recover. Their playing styles are also different: Spring says that Ocean is stronger; Ocean praises Spring’s better posture on court. They say that even though some might confuse them at school, at squash, people can always tell them apart by the way they play.

Highly motivated, the girls enlighten us about what keeps them going. While recovering from injuries, Ocean kept up light workouts and controlled solo sessions, while imagining herself back on court like everyone else. Although she missed some tournaments, she focused on the competitions ahead. She also gained wisdom: she sees every injury as a learning experience, and emphasizes the importance of warm-up, stretching, good diet, overall health, strength and conditioning exercises, and knowing when the body needs rest. Spring worries about losing to players seeded lower than her. She explains how to overcome self-doubt: she mentally stays in the game by remembering how much she has trained, and believing in herself. 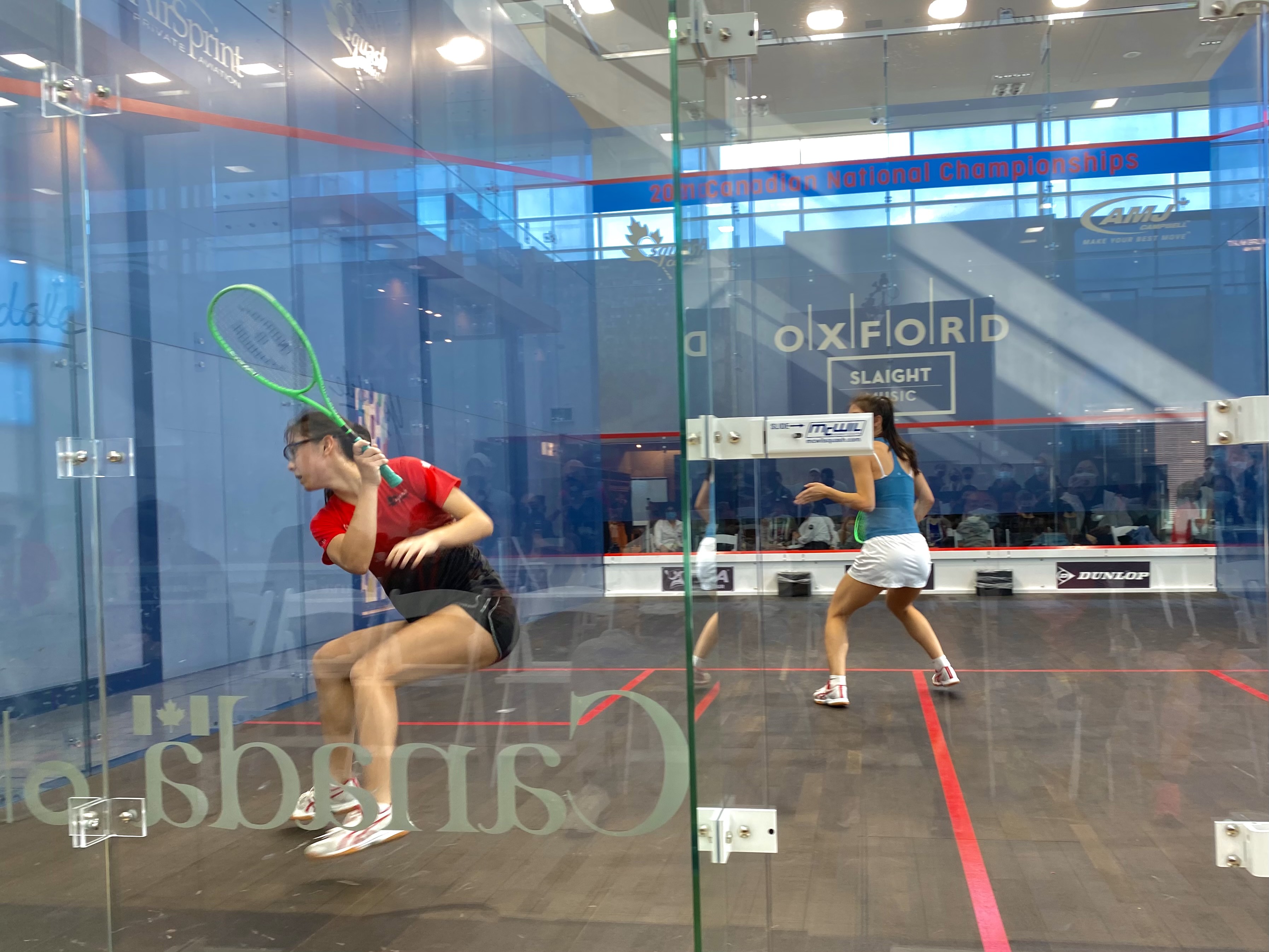 Ocean and Spring have trained with many coaches. Each coach has a different style and different strengths. Together, they help Spring and Ocean become more well-rounded players. They primarily train with Marco Toriz, an accomplished coach and former Mexican National Team Member/Coach. Marco has been mentoring and coaching junior squash players in Richmond, BC for over ten years through the West Coast Squash Academy.

Marco’s strength and cardio training helps them stand out against other junior girls. During the US Junior Open, the tight schedule of 2 matches in a row was physically demanding for a lot of players, but Spring and Ocean maintained their strength. Knowing that they can outlast their opponents boosted their confidence and helped them win.

According to Marco: Ocean and Spring showed exceptional work ethic from day one. They make every single session count, always coming to training with tremendous energy levels, the best attitude, and hunger for improvement. They are always keen to get stronger and be the best, and even spend extra time for practice. Fun fact: they are so competitive with each other, and used to always fight with each other during semi-private sessions. They are better now, but still fight sometimes. 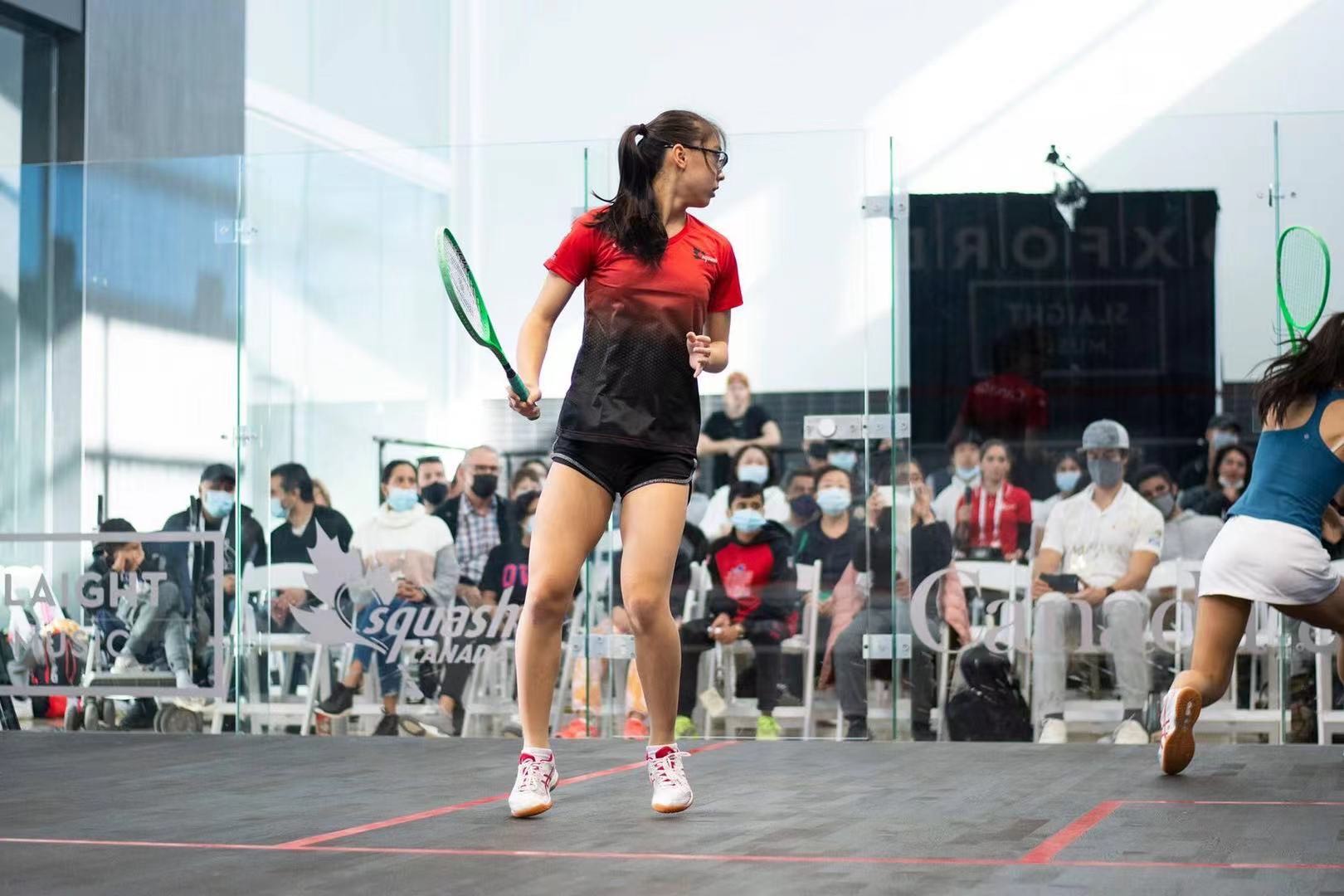 Spring and Ocean played at Sport Central in Richmond for 4 years, and recently moved to Vancouver International Tennis Academy (River Club) with Marco. They also play at other clubs and are friends with many girls in their age group. However, COVID-19 disrupted the sport. There was no play at all between March and June 2020, and then people only played within their small bubbles. This can be disheartening: an important way to gain experience is to play with a wide range of competitors. On the bright side, Spring and Ocean continued training at home and going for runs, and they could play with each other.

Spring and Ocean observed many kids quitting squash because of COVID-19. To promote squash and increase its popularity, they established the Sunshine Squash Club with Jacob and Wiehan Wang when everything was shut down, hosting events like Fitness on Zoom, Games Day, Women’s Squash Week, World Squash Day, fund-raisers, and an In-House Squash League. The Sunshine Squash Club began as a small community, and gradually expanded through word-of-mouth to over 140 members. It felt very rewarding for Spring and Ocean to watch kids join an event and then stick around because they really enjoy the sport. Not only are they inspirational sportspeople, but also youth leaders, authentically engaging and serving the squash community in a creative way.

Ocean and Spring have similar concerns as other teen girls, like grades and friendship, but squash made them much busier. Training 3 hours a day, they found it difficult at times to keep up with homework during finals season. Spring says that juggling school and a highly involved extracurricular activity taught her time-management, an important life skill. For Ocean, squash helped her improve both as a student and an athlete, because she learned to set clear goals and motivate herself. 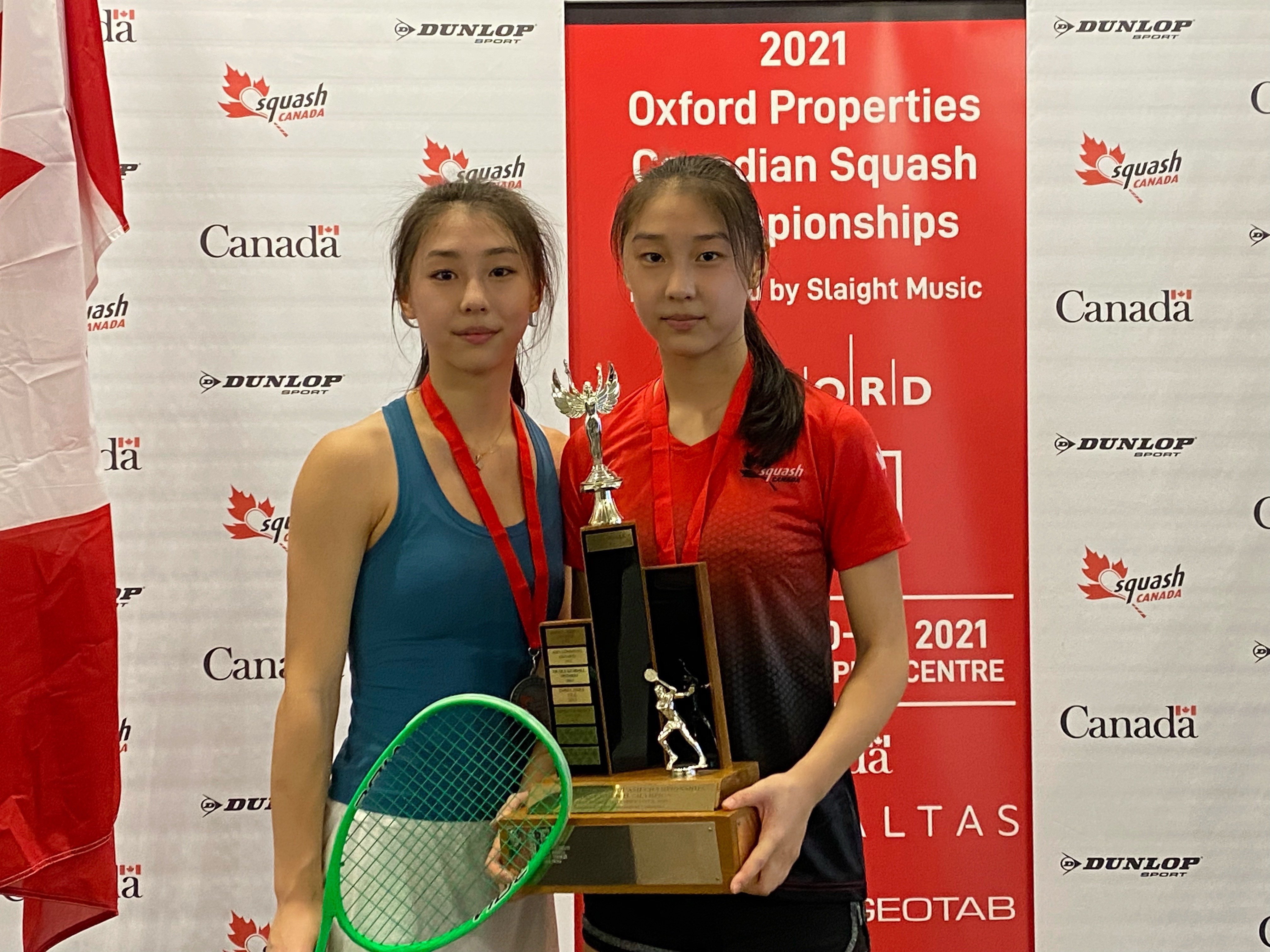 Both view their coaches as their biggest mentors, not only for their squash game, but also off-court, helping them improve as a person, and motivating and supporting them in all areas of their lives. Ocean is also inspired by videos of Raneem El Welily, a now-retired squash athlete, and admires how she pushes herself. She wishes to meet her role model when she pursues her squash career further. Spring looks up to Andrea Toth, 21-year-old squash champion currently at Princeton University on a squash scholarship. Her role model inspires her to achieve higher goals.

Squash has already brought the girls far. Ocean said her turning point was the 2019-2020 season, when she leveled up from intermediate to high performance, and started joining more tournaments outside the province. Never to sit on their laurels, they are looking forward to their next big tournaments, including The Canadian Junior Championships in Victoria, BC.

When asked for their advice to young girls thinking of picking up the sport, Spring thinks that experience with other racquet sports helps: having played badminton prior, her good racquet skills made squash easy to catch on. Ocean encourages everyone to give it a try, as you never know until you start. “Train hard and you will see results sooner or later!” On the other hand, Spring cautions her younger self not force herself to enjoy an activity just to avoid disappointing others, such as her family. With squash, it is her own willpower and love for the sport that fuels her to strive on.