Thanks to everyone who participated in the 2020 Ten Week Challenge. Women’s Squash Week is normally just one week in September, but because of the pandemic and limited play at many facilities, it was taken on-line with videos and resources. In 2020 we challenged you to be fit mentally and physically to be ready for Return to Squash (R2S). In previous years, we increased the number of participating clubs, the number of events and the number of participants which is the plan for September 20 – 26, 2021. 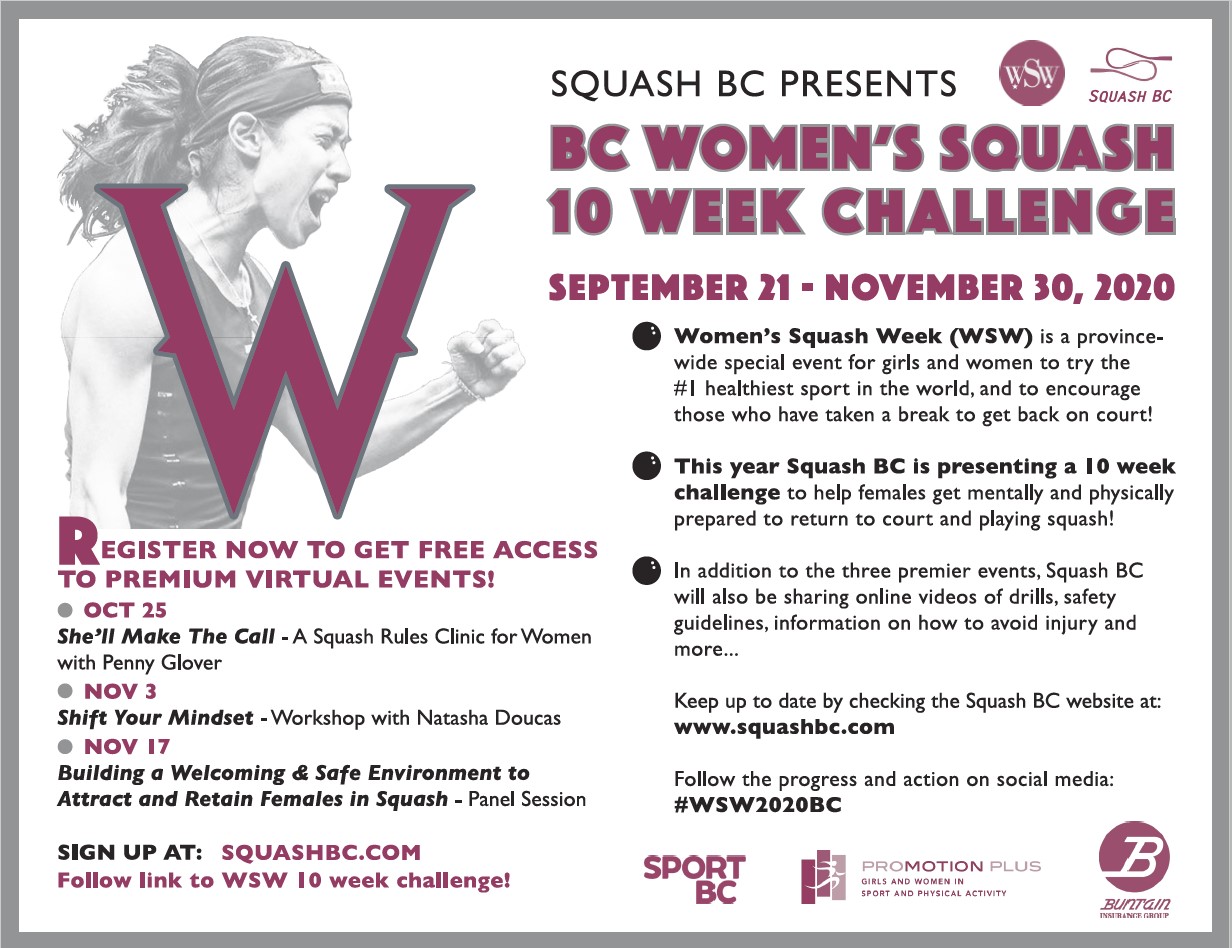 The Squamish Squash Club held an extremely successful Women’s Squash Week event on September 18, 2019.  This was its fifth annual such event and a record 58 women participated in the evening, 26 of whom were new players to the sport.  There was an on-court demo, followed by hands-on drills for the new players, and then a social component to introduce those new players both to each other and to existing members. Giving new players a big pool of friends to contact for matches is an important step in cementing their engagement with the sport. 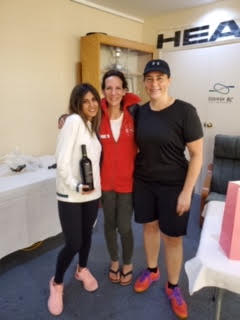 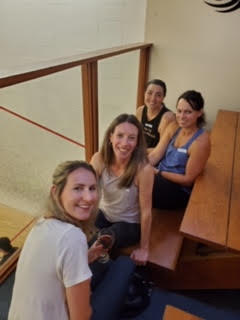 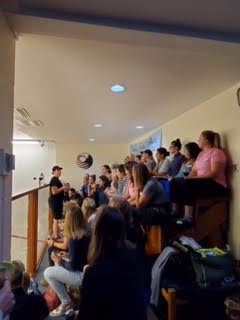 In order to capitalize on the interest shown in squash by so many women, the club offered a previously unavailable opportunity to new women players. The offer was a five-visit punch card for $45 that also allows them access to a women’s-only box league for six weeks (with the box league matches not counting against their five visits), essentially giving them 11 opportunities to step on court for the price of five!  They can then optionally upgrade to an annual membership by November 30, with their punch-card purchase(s) put towards the $500 annual membership.

The women’s-only box league ended up with a whopping 41 players, including some women who didn’t even attend the Women’s Squash Week event but had heard about it!  The club sold over 25 punch cards and welcomed several new 6- and 12-month female members as well.

Squash BC is looking to hear about other successes with WSW2019 or other female driven activities to promote across the province. Contact office@squashbc.com.

The numbers are in. 18 Squash BC Member Clubs held 21 events to make Women’s Squash Week 2018 an unqualified success!
We had approximately 310 women come out and make the most of this celebration of squash and women. Some of the clubs shared their squash stories:
Kamloops Squash Association ran two event sessions! Turnout was solid, with 13 players and two coaches. Two players had played before and the rest were new to squash. We have some follow-up sessions planned – we look forward to getting these new squashers back to the courts!

Nanaimo Squash Club had 12 women come out for the event and 11 of them returned for free clinic held after the event.

The Club handed out a 60-day pass and four 30-day passes along with lunch bag “prize” from Squash BC.
Participants were offered additional promotional club membership passes which proved popular. The club is looking forward to seeing these women continue with our great game!

Cheam Leisure Centre had 17 women participate in their intro coaching and round robin event and enjoy some socializing afterwards with a glass of wine.

Squamish Squash Club“Our event was a great success… we had 6 new women sign up to attend our Ladies’ Squash 8-week program that starts up this week which is great for our membership.”

The Victoria Squash Club welcomed 20 women to their Women’s Intro to Squash event on Saturday, September 22. There were four instructors on hand to show them the ropes and organize the round robins and between all the laughter and wine and appies, a good time was had by all!

Vancouver Racquets Club held an exhibition match followed by 2 hours of drop-in/ round robin play and a reception afterwards in our bar. Result? 20 new/returning women interested in squash!  Added to the 15 volunteers = a total of 35 participants at VRC for the WSW 2018 event!

The Arbutus Club “The women’s squash evening was a huge success… I counted 22 keen, athletic women during the evening, and Ian had all 5 courts buzzing with action. At the end of the night, many of the women seemed interested in creating an informal women’s drop in on Thursday nights which would be fantastic.”

The Jericho Tennis Club hosted two ‘sold out’ Women’s Squash Events as part of the province wide BC Women In Squash Week.

On Saturday Sept 15th, 10 women from both squash and tennis joined an Intro to Squash session.  These ladies had an opportunity to pick up a racquet and learn about the basics of the game.  It was a great time for everyone who had fun running around the court and meeting some new friends!

On Tuesday Sept 18th, 41 women (14 years to 60+!) came out for a round robin, reception and an intro to refereeing thanks to our very own Dara Sklar!  This was a great way for women of all levels to come together, have a laugh, and celebrate this beautiful game!
Huge thanks to our Squash Professionals Richard Yendell and Sarfaraz Ahmed for pulling this together as well as Promosapien for their support of this province wide initiative.
Vancouver Lawn Tennis & Badminton Club celebrated women’s squash with a mini tournament on Sep 22 and a free coaching clinic for any new players.

We had a good mix of 15 fantastic ladies that took part. New players were involved in the free coaching clinics while the other players took part in a mini tournament. One of the highlights was seeing Debbie Hungerford playing squash again for the first time in 30 years!

Thanks to Kristen Goldsmith, Laura Ramsay and Carolyn Russell for helping out and making this a terrific event!
Bayside (Parksville): “We had a great time…small community but it looks like we have seven new women interested in playing either in league or socially until they feel strong enough for league. We covered everything we said we would with lots of sharing and interaction from court to court.”
Draw Winners!
Squash BC’s Women in Squash Committee arranged a few draw prizes for Women Squash Week 2018 participants. We are excited to announce that:
Joanne Reaka, Megan McMillan, and Donna Barker who attended events held at Nelson, Jericho and Arbutus respectively have each won a racquet courtesy of Black Knight and Squash BC.
We will be reaching out through the Clubs to get these prizes to each of the winners!
Overall, we are thrilled at this year‘s Women‘s Squash Week. Again, thank you to participating clubs, coaches, pros and women ambassadors!
We also wish to thank our Community Partners:

November 10-12, 2017 marked the first annual Queen of the Hill Women’s Squash Weekend at The Westin Resort & Spa, Whistler and Meadow Park Sports Centre. While the event was more intimate this year with only 12 participants, the weekend attracted participants from Vancouver, Victoria and Winnipeg.

The weekend began with a welcome reception in the Grill and Vine Restaurant where the ladies enjoyed wine tasting and appetizers while engaging with mental performance coach Christine Suter.

It was an early morning on Saturday. Breakfast at leisure in the Grill and Vine, followed by Yoga with Kim Fournel, Strength Training with Diana De Man, Refereeing Clinic with Christina Yap and the first couple of rounds of the tournament play. The tournament play featured two Flights of players in a round robin format for both divisions followed by the semi-final and finals.

The evening featured Savour, a Cornucopia event at the Westin. Wine tasting, savoury food with a band as well as a dance floor where the ladies could strut all their moves. The ladies even got personal with the band.

Sunday morning was a slightly later start with Stretching and Rolling out the tired muscles followed by the tournament finals. Snow was flying so everything wrapped up at just before 3:00 pm so all the commuters could head back down the hill. Some decided to stay an extra night or two to enjoy a few more days of Cornucopia.

Feedback from the participants about the weekend included:

“Great value for the weekend”

“We felt spoiled the entire time”

“Overall, I feel the event was a success! It was smaller numbers than we anticipated, but we had a few things to work out for our first year and started promoting it a little late. Now, with one year under our belt, we know the event will be even better next year,” says Carol Eberhard, one of the organizers. 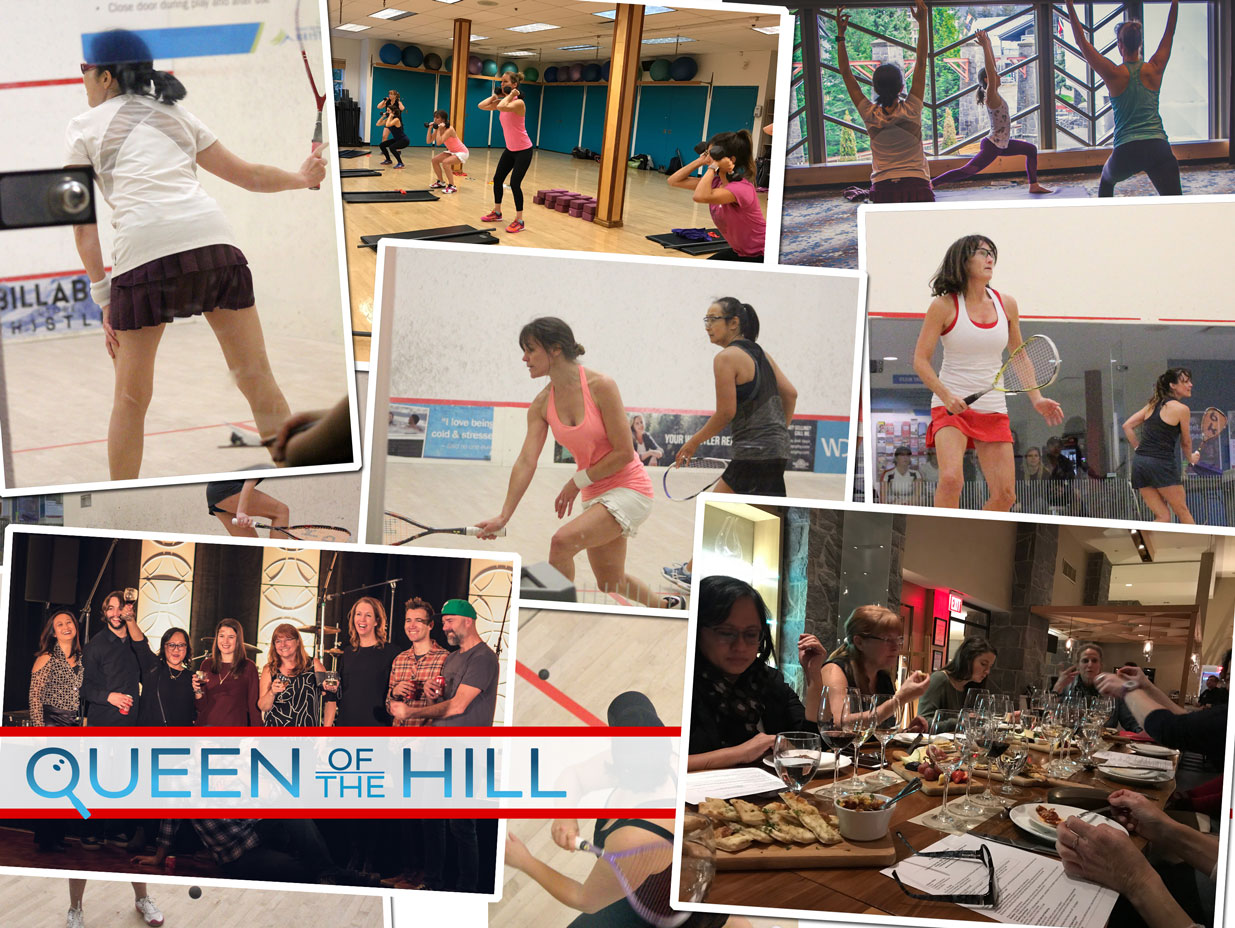 Several clubs across the province participated in Squash BC’s 1st Annual Women’s Squash Week. Squash Pros, Club Managers and Program Coordinators were in strong support this year of an initiative that has been gaining a lot of popularity over the years. Women’s Squash Week (WSW) was started in the U.S. in 2008, the Vancouver Squash League brought it to the clubs in the Lower Mainland in 2013, and this year, Squash BC has expanded WSW across the province with 18 clubs offering 21 different events.

Participating clubs held an array of events in the regions of Vancouver Island, the Kootenays, the Okanagan, Whistler, Squamish, and Vancouver to get women playing the game. Whether they were new or current players of Squash, players enjoyed the many ways they could learn or improve their skills as well as get together for some social atmosphere afterwards.  There were Skills games, Intro drop-ins and even free access to play squash all week long.

This event has now become an international staple on the calendar growing to  7 countries: Canada, US, Barbadoes, Bermuda, England, Ireland, Hong Kong. This year’s event was even more special as the 2nd weekend tied in Squash Canada’s National event on September 30th Squash Day in Canada that tied into ParticipACTION150 in recognition of Canada 150.

Squash BC would like to thank all the sponsors of this event: James Watt from Karakal, Brook Siver from Manta, Boyd Muir of Tecnifibre, James, John, Bruce & Coco at Black Knight and Steve Lawton from Apollo Emrik. Special thanks goes to Robert Pacey of Squash Republic for the poster design and continuous support of this event over the years.